About the Pro Football Hall of Fame Enshrinement Week

Pro Football Hall of Fame Enshrinement Week Powered by Johnson Controls takes place every year in Canton, Ohio. This week of events honors the best to ever step onto the gridiron and serves as the signature kickoff event of the NFL football season.

Click on any of the sections below to learn more!

In & Around Canton
VIEW INFO

How to Attend the Pro Football Hall of Fame Enshrinement Week

Attend the Pro Football Hall of Fame Enshrinement Week Powered by Johnson Controls with HOF Experiences! An Official Ticket Package can include premium seating at the Hall of Fame Game, Enshrinement and Concert for Legends. Additionally, you can receive access to VIP parties, Hall of Fame autograph sessions, exclusive events and more.

Who is in the Pro Football Hall of Fame Class of 2020?

On February 25, 2020, the Pro Football Hall of Fame also confirmed that Jimmy Johnson, Bill Cowher, Steve Sabol, Paul Tagliabue and George Young would also be enshrined during August, entering the Hall as members of the Centennial Class. 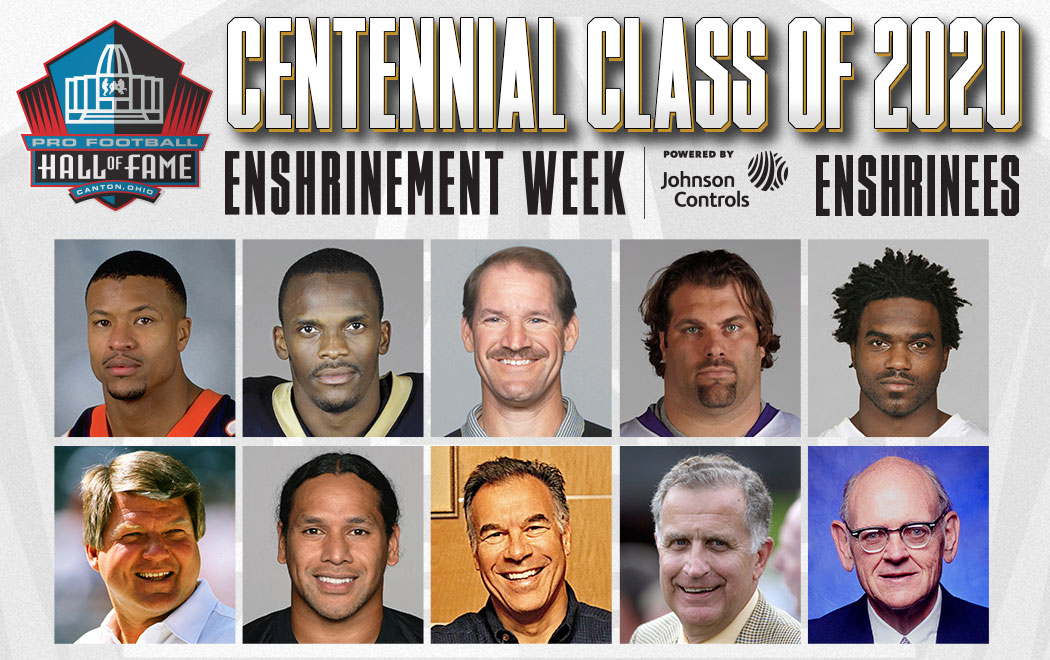 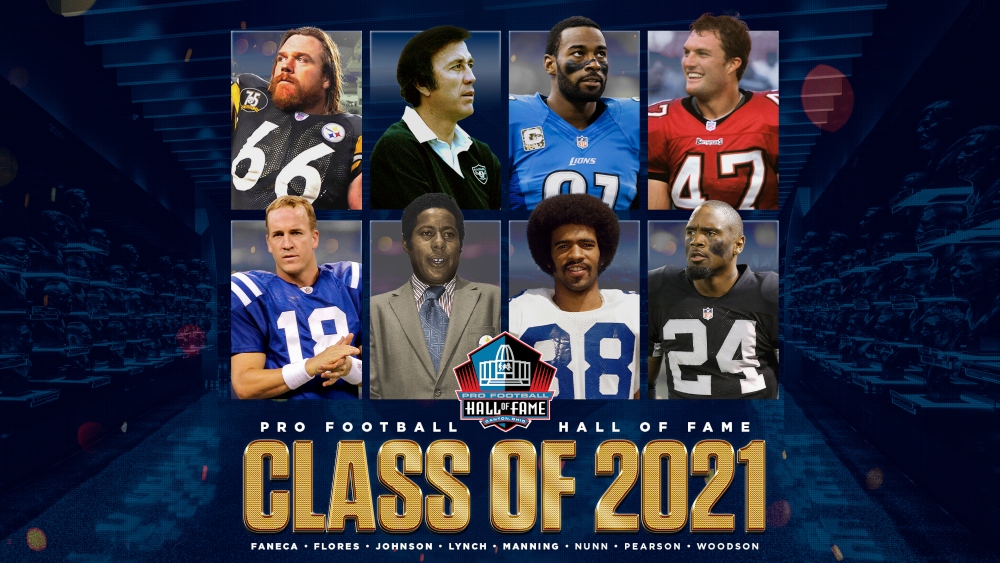 WHO IS IN THE PRO FOOTBALL HALL OF FAME CLASS OF 2021?

Learn more about the exclusive Hall of Fame events and VIP parties that you can attend during Enshrinement Week.

Get access to Official VIP parties during Enshrinement Week. Parties feature gourmet food, premium beverages, access to returning Hall of Famers and much more! Take a look at our party offerings.

Start the weekend off right at the VIP Kick Off Tailgate Party. Go behind the scenes with meet-and-greet access to several Pro Football Hall of Famers. Past attendees have included Dick Butkus, Jim Taylor, Kellen Winslow and Randall McDaniel.

Celebrate the first preseason game of the NFL season at the official tailgate party for the Hall of Fame Game.

Watch the Gold Jacket Presentation broadcast directly from within the walls of the Hall of Fame. Enjoy exclusive after-hours access to the Hall of Fame while indulging in gourmet food and premium drink selections.

Live it up with members of the Pro Football Hall of Fame at the official tailgate party of the Enshrinement. Go inside the Hall of Fame for pictures and meet-and-greet access with several Hall of Famers. Former attendees include Billy Shaw, Dermontti Dawson, Derrick Brooks and Ray Guy.

Enjoy a party filled with laughter, fun and music in the lead up to the Enshrinement. This party is the perfect warm up for the main event of the whole weekend.

Prepare for the Concert for Legends inside Tom Benson Hall of Fame Stadium with great food, cold beer, entertainment and more!

Where is the Pro Football Hall of Fame 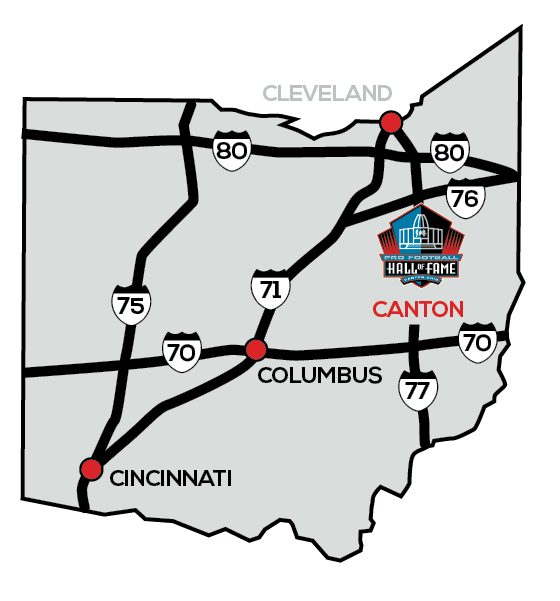 Canton is in northeastern Ohio’s Stark County and is the birthplace of American professional football. This city is not only home to the Pro Football Hall of Fame and Tom Benson Hall of Fame Stadium, but to many other nationally-recognized and historical events and locations as well. The William McKinley Presidential Library/National Monument and National First Ladies Library and Research Center are a couple of Canton’s most popular attractions. The 21 beautiful public golf courses throughout Canton earned it the nickname “Ohio’s Golf Capital”.

The 75,000-person city boasts a vibrant art community with the Canton Symphony Orchestra, Canton Ballet and Canton Museum, along with a thriving medical industry with several world-class hospitals and nearby universities. This upbeat, yet historic, city is like no other, and is only 30 minutes from Akron, Ohio, and less than an hour from Cleveland. 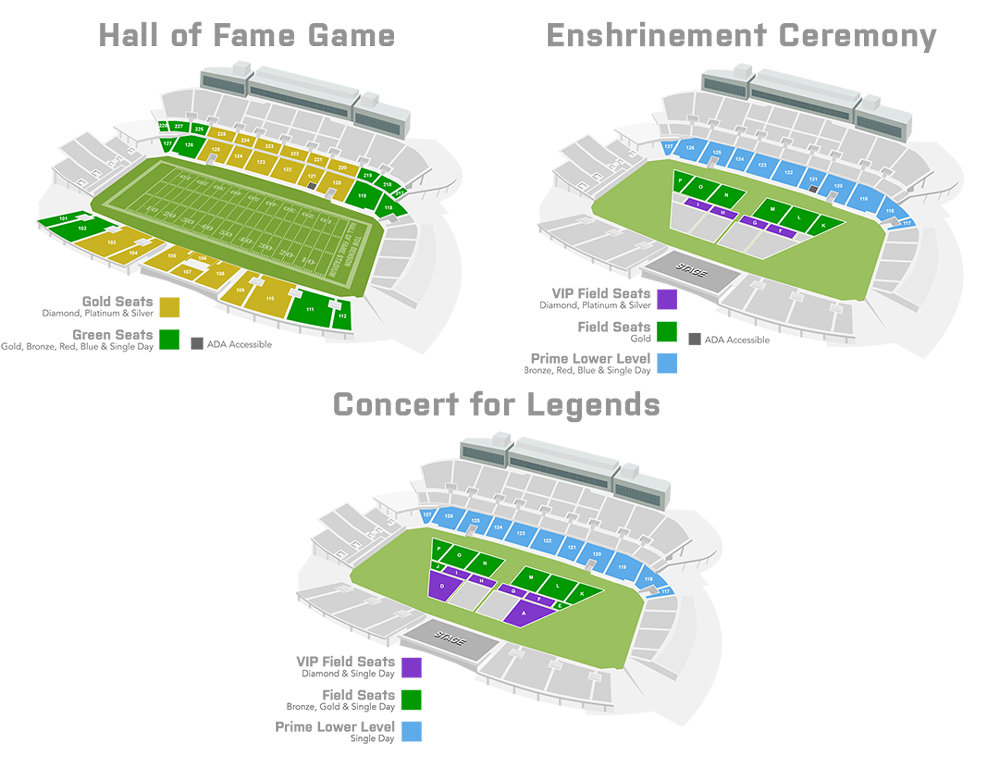 Things to do in Canton

Looking for things to do during your week in Canton? Check out our guide for the best local restaurants, popular landmarks and more.

Established in 1978, this museum boasts “forty rare and unusual classic and special interest automobiles” displayed among thousands of pieces of historical memorabilia. There’s a little something for everyone in the family in this well maintained and fun museum location in the heart of Canton.

Visit the home the 25th President of the United States. This Library is one of the first of its kind dedicated to the memory of William McKinley. The interactive and hands-on science center is one that will delight the entire family. Be sure to walk through the museum of William McKinley as well as the library. There is also a must-see planetarium on the site that kids will surely love.

Pay your respects to the late President William McKinley. McKinley’s is known for his many difficult foreign policy decisions. His policy toward China, the Boxer Rebellion, and his decision to go to war with Spain, helped the United States become the powerhouse it is today. This memorial reminds us to take a moment to thank the men and woman before us who have laid the groundwork for the lives we’re living today.

As the cornerstone of the Downtown Canton Arts District, the Canton Palace Theatre is keeping the 20s alive and well in the heart of Canton. You can experience both live shows and movies in this historically beautifully theater.

Learn about the First Ladies of the United States in this historical library. You’ll have the chance to explore the library and the home of Oda Saxton McKinley. Take a stroll through the streets of Canton and appreciate the history of our fine nation.

Need hotel accommodations? Official Ticket Packages from HOF Experiences include the option to add 3- or 4-night hotel stays in Canton and the surrounding area. Take a look at which hotels can be added to your ticket package.

Please read the bag policy very carefully. The Pro Football Hall of Fame adheres to NFL Best Practices, meaning that all security procedures used during all NFL games will be used at Tom Benson Hall of Fame Stadium.

As you arrive at the gate for your security check, you and your belongings will be screened for prohibited items. All individuals are subject to a hand-wand screening.

Due to enhanced security procedures, the only bags, packages or containers permitted to be carried into the stadium are the following:

PLEASE PLAN ON ALLOWING EXTRA TIME TO ENTER THE STADIUM. Prohibited items discovered during inspections will not be allowed on the premises. You may return prohibited items to your vehicle or dispose of them at the gate.

If you bought hotel accommodations with one of our HOF Experiences packages, you will have transportation provided to and from the hotel and the Hall of Fame grounds. However, if you choose to drive, please be aware that parking is limited. Your options include:

Next to the Stadium

Preferred Parking next to the stadium is available for purchase.

It's just a few minutes away! Set your GPS to 700 Wertz Ave. NW, Canton, 44708. Use the SARTA Bus Shuttle for transportation to Tom Benson Hall of Fame Stadium. Directional signage is posted. Pricing is TBD. 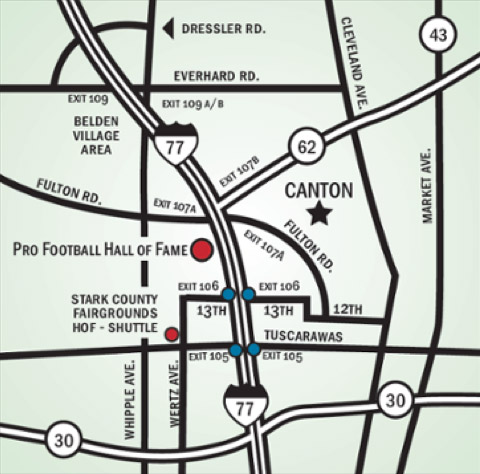 We recommend dressing business casual at the Gold Jacket Reception and Ceremony. You’ll see guests in both cocktail and casual attire, so business casual is a good middle ground. For men, opt for a polo shirt or button down accompanied by a nice pair of slacks or khakis. For women, a regular dress or blouse with slacks should do the trick!

For the Rest of the Weekend

Dress comfortably and appropriately to enjoy your experience. You are there as both a guest and a fan, so don’t be afraid to don a t-shirt or jersey showcasing your favorite team or player. We recommend wearing sneakers to avoid blisters or sore feet at the end of the day. Supportive sandals are an appropriate choice as well.

Canton gets pretty warm in August. Temperatures typically stay between the 70’s and 80’s during this weekend, but we recommend checking the 10-day forecast before getting ready to leave. Make sure to pack a rain jacket or poncho in case of emergency.

We recommend packing both shorts and pants to ensure you are prepared for all temperatures. The Hall of Fame is air-conditioned and our party venues are climate-controlled, so you will have the opportunity to get out of the sun. The temperature is known to drop in the evenings so it’s good to be prepared. 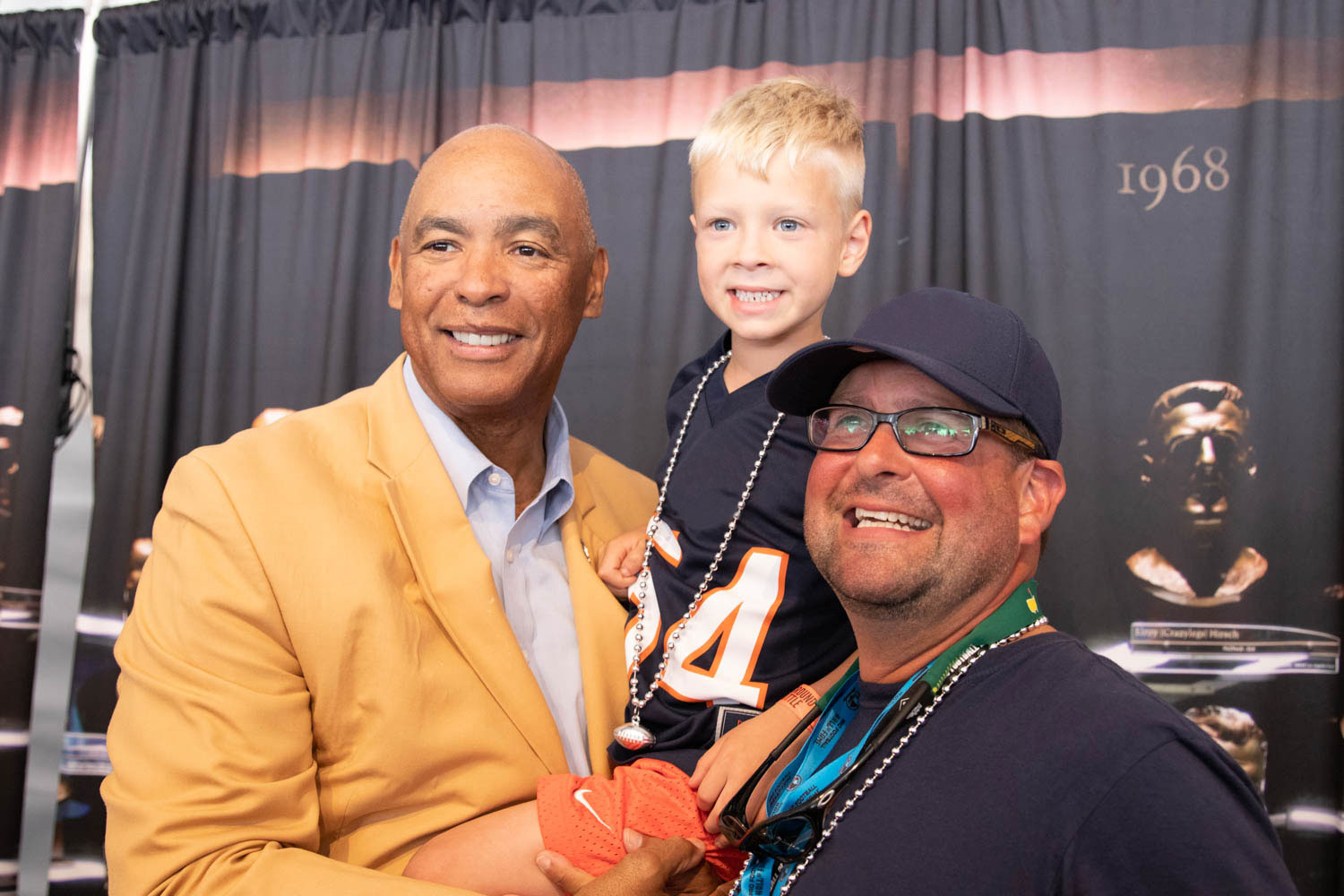 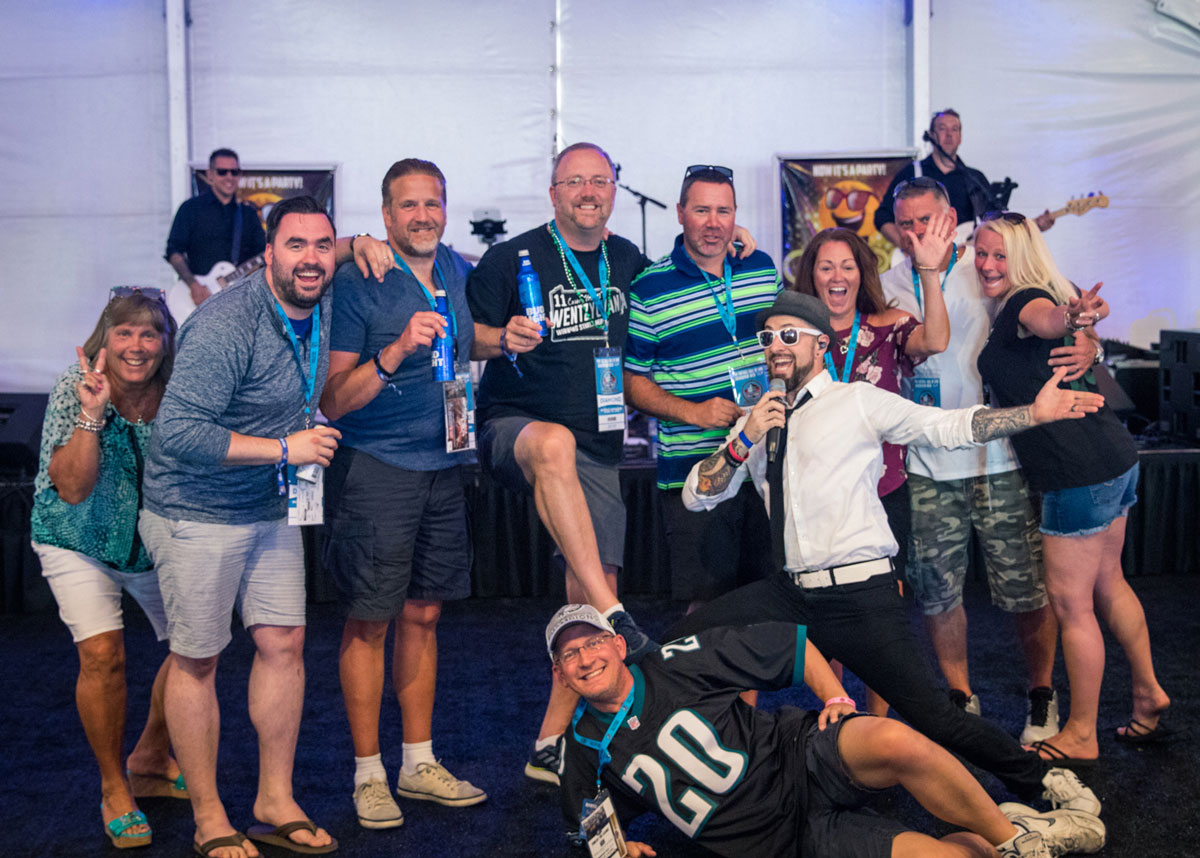