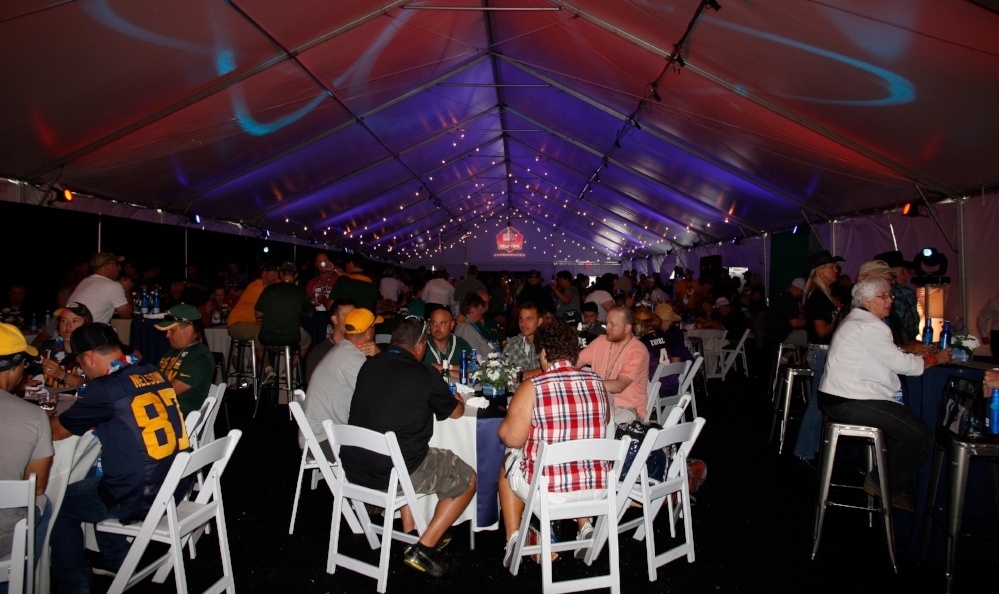 We are back from Canton, Ohio where we spent four days at the Pro Football Hall of Fame Enshrinement Weekend! Over the next month, we will be recapping our experience – which was awesome, by the way – beginning with a discussion about our VIP parties.

At the Pro Football Hall of Fame, we had two party tents: Diamond and Gold. Throughout the weekend, we held various parties for all of our guests; they were definitely the place to be! From delicious food and alcoholic beverages to music and dancing, each party had everything our guests needed to get ready and pumped up for the night. Plus, all of the venues were climate-controlled, so the parties were a nice escape from the heat.

Below, we’ve laid out the different parties that our HOF Experiences’ guests attended, and we also have included 360° videos so you can see the venues for yourself!

On Friday, the Pre-Concert Legendary VIP Party was quite the hit. Guests enjoyed a gourmet dinner (steak, shrimp, green beans, mashed potatoes, salad & fruit) and an open bar to get them ready for the Concert for Legends featuring Tim McGraw!

On Saturday, the Diamond tent hosted the Gold Jacket VIP Party, which once again featured gourmet food, an open bar and music. The highlight of the party was definitely the Gold Jacket appearances! Pro Football Hall of Famers Andre Reed, Randall McDaniel, Derrick Brooks, and Jack Youngblood stopped by to meet our guests and take pictures with them.

We wrapped up the weekend with the VIP Kickoff Tailgate Party.  Similarly, to the Gold Jacket VIP Party, this party featured more delectable food, an open bar and music. We also had more Gold Jacket appearances, this time from Billy Shaw, James Lofton, Joe DeLamielleure, Jimmy Johnson and LeRoy Kelly. All of the Hall of Famers were very engaged with our guests: Billy Shaw even let people try on his Hall of Fame ring!

Click and drag the videos below to see for yourself what this party venue was all about!

On Friday, our other guests enjoyed the Official Pre-Concert Party, which featured beer & soft drinks and live music from the Redneck Romeos! Plus, Runaway June – the opening act for Tim McGraw – stopped by to sing a few songs and keep the party rocking.

The Gold tent also held the Enshrinement Celebration Fan Party on Saturday. This party had an array of tasty food and, of course, all the beer you could imagine.

On Sunday, the Game Day Tailgate Party was in full swing with plenty of tailgate-style food, beer and music.

Click and drag the video below to see for yourself what this party venue was all about!

We already have packages available for the 2017 Pro Football Hall of Fame Enshrinement Weekend. Each package comes with access to one of these exclusive venues for three days of parties. That means three days of alcoholic beverages, delicious food, music and dancing to get you pumped up about the Class of 2017.

You can view more photos of these parties in our Facebook album.