Centers deserve love, too, and one of the greatest to ever strap up his pads will be enshrined into the Pro Football Hall of Fame on August 3. Let's take a look back at the 5 moments that made Kevin Mawae worthy of the Hall of Fame. 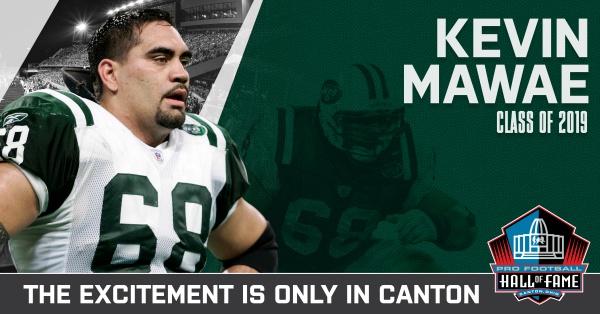 After two seasons lining up at right guard for the Seattle Seahawks, Kevin Mawae was moved to center before the start of the 1996 season. Mawae played center for a few games in college, but never had fully moved over to the position. After a dominant first season in his new position, he would remain at center for the rest of his career and create a Hall of Fame legacy in the middle of the offensive line.

After four years as a Seahawk, Mawae signed as a free agent with the New York Jets before the 1998 season. In his first season in New York, Mawae led the offensive unit that helped running back Curtis Martin run for 100 yards in eight games (a franchise record), eventually amassing 1,287 rushing yards over the year.

Mawae's second season in a Jets uniform is what official turned him into a star. Even with a rotating chair at quarterback, Mawae captained the offensive line and pushed Martin to another record-breaking season — this time setting a then-franchise mark of 1,464 rushing yards in a single season.

Martin was inducted into the Pro Football Hall of Fame in 2012 and claims that he wouldn’t have earned the honor without Mawae paving the holes in front of him for years.

From his first season in 1994 all the way to the end of his run in New York in 2005, Mawae started an immaculate 177 consecutive games.

While this number doesn’t set any records, it points to Mawae’s success and dependability for over a decade of his career. He was performing at the highest level in the sport and was there for almost every single snap, whether pass or run blocking.

The streak came to an end just six games into the 2005 season as Mawae suffered a tricep injury that forced him to miss the remainder of the year.

Following the conclusion of the 2005 season, Mawae was cut by the Jets and promptly signed by the Tennessee Titans.

His impact was felt immediately, as Mawae spearheaded an offensive line that set the Titans franchise record for average yards per carry (4.7 ypc) and ranked fifth in the NFL in total rushing with over 2,200 yards.

This season not only proved Mawae’s versality when moving to a completely new system, but also showed that the lineman, now 13 years into his career, still had it.

Mawae’s 2009 season was his final in the league and still proved to be one of his best.

While the center will go down as the man leading the way for Curtis Martin, he was also vital to Chris Johnson’s historic 2009 season.

Be There for Mawae’s Ultimate Hall of Fame Moment

Witness Mawae's enshrinement into the Pro Football Hall of Fame with an Official Ticket Package from HOF Experiences. Choose from Single, 2-, 3- or 4-Day packages for the ultimate experience in Canton.