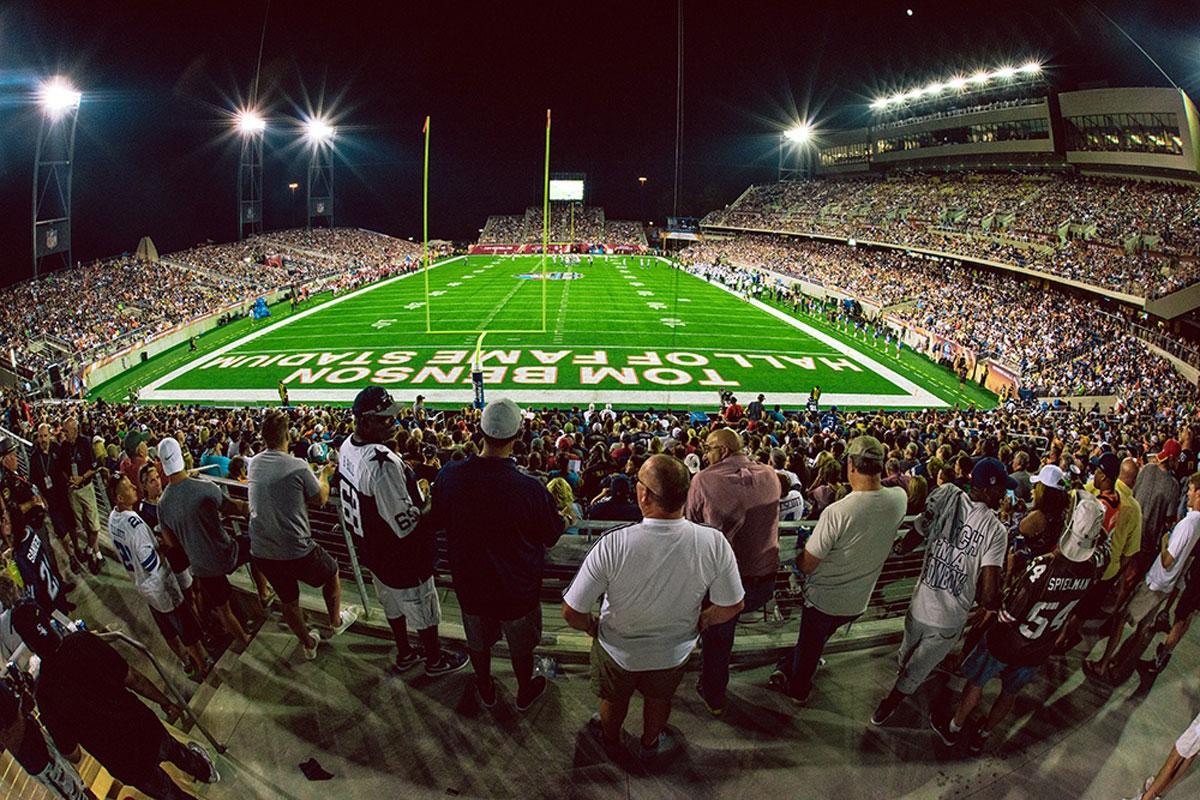 The NFL season officially kicks off next week with the Hall of Fame Game! The Chicago Bears and Baltimore Ravens will take a break from training camp to head to Canton and get the season underway. With an offseason full of action wrapping up, we thought we'd take a look at some of the biggest stories that will materialize at the Tom Benson Hall of Fame Stadium on August 2.

One of the best offensive minds in the AFC has made his way to the NFC in an attempt to turn around the Bears' attack. New Bears head coach Matt Nagy will make his debut in blue and orange in Canton, kicking off a new regime for the Chicago staple.

Nagy has spent the past decade coaching under Andy Reid in Philadelphia and Kansas City, so it's easy to predict that his offensive schemes for the Bears will mimic what was seen at Arrowhead Stadium over the last couple of seasons. It's important to note that Nagy was only the Chiefs' primary play caller for the last five games of 2017, but Reid still felt comfortable enough to call Nagy the best head coaching prospect he's ever had in his system.

The Sophomore Campaign of Mitch Trubisky

Nagy's success in his new position will directly be linked to the progress of second-year quarterback Mitch Trubisky. The No. 2 pick in the 2017 NFL Draft had a divisive rookie campaign -- rarely floundering but never being given the opportunity to flourish due to an offensive system that didn't fit his talents.

But now the North Carolina product has Nagy by his side, and the duo will work in tandem to try and rebuild the Bears offense from the ground up. Nagy's system replicated what Trubisky excelled at in college -- a shotgun heavy, RPO-styled offense. It also allows Trubisky to feel in better command of the offense with more options to audible, a luxury he wasn't afforded often during his rookie season.

Expect the new-look Bears offense to make its debut at the Hall of Fame Game, and for Trubisky to show off some of the skills that he's been hiding in his arsenal since college.

The Hall of Fame Game could also be the first opportunity for Trubisky to play with his new toys on offense. Chicago splashed this offseason on receiving talent in hopes of providing Trubisky with a myriad of options on every down. The Bears added receivers Allen Robinson (from JAX) and Taylor Gabriel (from ATL) while also drafting Memphis' Anthony Miller in this year's NFL Draft.

Robinson made his name with the Jaguars, catching 80 passes for 1,400 yards and 14 touchdowns in 2015. Robinson will be looking to get back on the saddle after his 2017 season came to a halt in Week 1 after suffering a torn ACL.

Gabriel is an explosive talent who became a household name after two successful seasons with the Falcons. The slot receiver caught 33 passes last year for 378 yards and one touchdown.

A First Look at Lamar Jackson

The most electrifying player over the last two years in college football will be making his NFL debut at the Hall of Fame Game. Louisville's Lamar Jackson was drafted by the Baltimore Ravens with the final pick in the first round of the 2018 NFL Draft and will split time with fellow quarterback Robert Griffin III in Canton. While Griffin III will likely start the game, Jackson should get a heavy load of snaps throughout the game.

The former Heisman Trophy winner will look to make the most of the opportunity during the preseason because he's predicted to spend the regular season on the bench learning from long-time Ravens starter Joe Flacco. But this game is an opportunity to show that the future is now in Baltimore.

Jackson is one of the most enticing duel threat QBs to come into the league in recent memory. He combined for 51 touchdowns (30 passing, 21 rushing) during his Heisman-winning season in 2016 and 45 touchdowns (27 passing, 18 rushing) in 2017.

If you want to see these headlines become realized in person, you can! A Thursday Single Day Package with Hall of Fame Experiences gets you a ticket to the game, access to the Game Day Tailgate Party and 1-Day Hall of Fame Admission. With the game just days away, what are you waiting for?

I want to go to the Hall Of Fame Game!