Get Tickets to the 2017 Hall of Fame Game: Arizona Cardinals & Dallas Cowboys 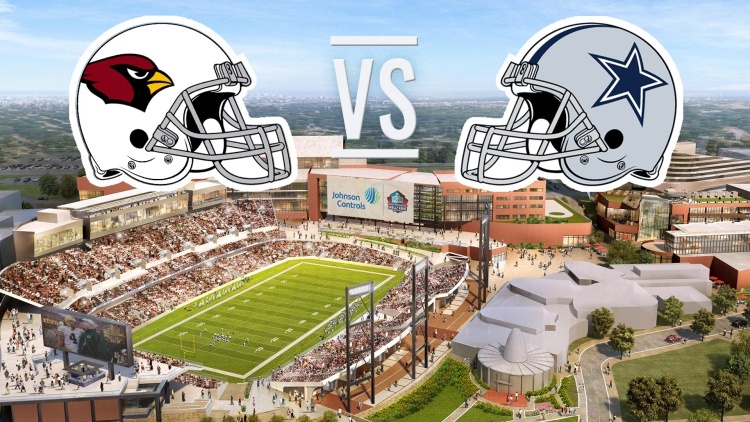 Take a look at the teams’ Hall of Fame Game records below:

With Jerry Jones and Kurt Warner being inducted into the Pro Football Hall of Fame Class of 2017, it only makes sense to have the Cowboys and the Cardinals in the Hall of Fame Game!

The Cowboys’ Owner/President/General Manager Jerry Jones purchased the Cowboys in 1989 and quickly turned them into a winning franchise. He became the first owner in league history to win three Super Bowls in the first seven years of ownership. Under his leadership, the Cowboys made seven playoff appearances, won six division titles, advanced to the postseason 13 times and posted 10 wins a season 12 times.

Kurt Warner spent five seasons with the Cardinals, leading them to their first division title since 1975 and the franchise’s first-ever Super Bowl appearance in the 2008 season. Overall, Warner was a standout quarterback being the only one to throw for 300 yards or more in three Super Bowls at the time. He led the Rams to the Super Bowl twice, set a Super Bowl record with 414 passing yards and was the Super Bowl XXXIV MVP.

Jerry Jones and Kurt Warner are among the seven-man Class of 2017 that also includes Morten Andersen, Terrell Davis, Kenny Easley, Jason Taylor and LaDainian Tomlinson. Get to know the complete class here.

See the Cardinals and Cowboys in the Hall of Fame Game

Join us for this preseason classic! HOF Experiences provides Official Ticket Packages to the Hall of Fame Game and other Hall of Fame events throughout the week, including the Class of 2017 Enshrinement Ceremony. Enjoy premium seating, get access to Official parties, meet Pro Football Hall of Famers and more. Click below to learn more about the available packages or give us a call at 844.751.0532. See you in Canton!