One of the most exciting parts of getting inducted into the Pro Football Hall of Fame is getting to unveil your bronze bust. Each inductee spends countless hours with the sculptor of the busts, but they don't actually get to see the final product until the night of the Enshrinement Ceremony. This makes it equally exciting for the enshrinee and for all the fans!

The busts are some of the most magnificent pieces of art you will ever see, each sculpted with intricate details that make the them appear almost identical to the new members of the Hall of Fame.

So who is the famous sculptor of the Pro Football Hall of Fame's bronze busts?

As the chief sculptor for the busts, Buswell is the mastermind behind these incredibly-detailed prized possessions. He created his first bust for the Pro Football Hall of Fame in 1983 and has since created almost 100. Prior to 1983, the busts were sculpted by Jack Worthington, who sculpted a total of 144 after the Hall of Fame opened in 1963.

Interestingly enough, Worthington never met any of the players or coaches he sculpted. In order to create the busts, he had to go off of old pictures and use hat size to estimate the size of the busts. Buswell, on the other hand, always tries to meet with the new inductees to take photos and get measurements. He then schedules a posing session with them, with those sessions running as long as 10 hours.

These works of art are truly mind blowing. It's obvious why Buswell spends so much time with the Hall of Famers. He wants the busts to mirror them as closely as possible. Typically, Buswell suggests that the enshrinees don't smile; however, they certainly can if they want to, which we saw with Michael Strahan. He insisted that his gap-toothed smile was an essential feature and that no one would recognize his bust if it wasn't a part of it. So, even though it presented quite the challenge, Buswell made it happen, and needless to say, Strahan loved it. 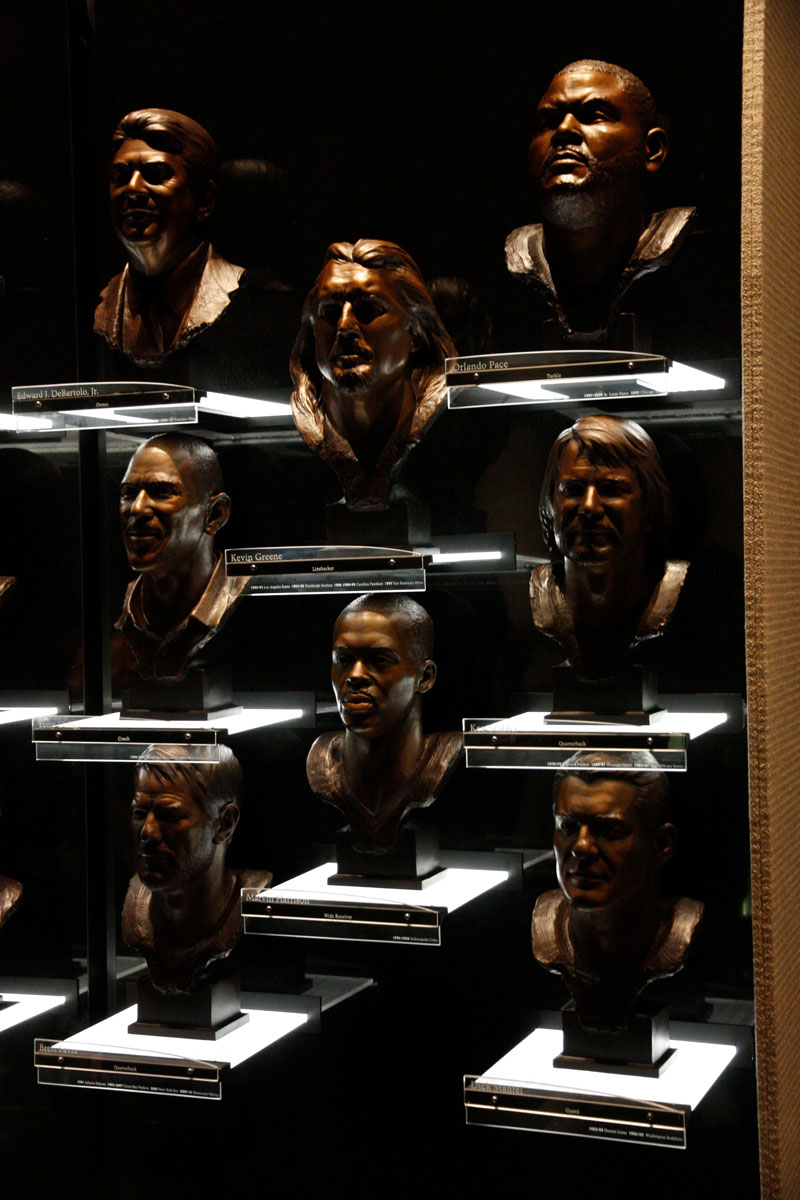 Ever since he was a little kid, Buswell loved sculpting. He visited the Hall of Fame for the first time as a teenager – who would have thought years later his childhood dream of sculpting the busts would come true? It's been quite the journey so far, and we can't wait to see the bronze busts Buswell creates over the next several years.

Check out the video below to see photos of the sculpting process.

Join HOF Experiences at 2020 Enshrinement Week Powered by Johnson Controls with an Official Ticket Package. Meet Hall of Famers, attend exclusive VIP parties, get premium seats for the 2020 Enshrinement Ceremony and much more!