Jerry Rice: Host of the Gold Jacket Club at the 2020 Super Bowl

We are excited to have Pro Football Hall of Famer and San Francisco 49ers legend Jerry Rice join us at the 2020 Super Bowl as the host of the Gold Jacket Club.

Over the course of an unthinkable 20 year playing career, Rice put up astronomical numbers that cemented him as the most prolific offensive player ever to grace an NFL field.

As a three-time Super Bowl champion, Rice will be able to show off his rings as well as his gold jacket when he takes the stage as host of the Gold Jacket Club in Miami. 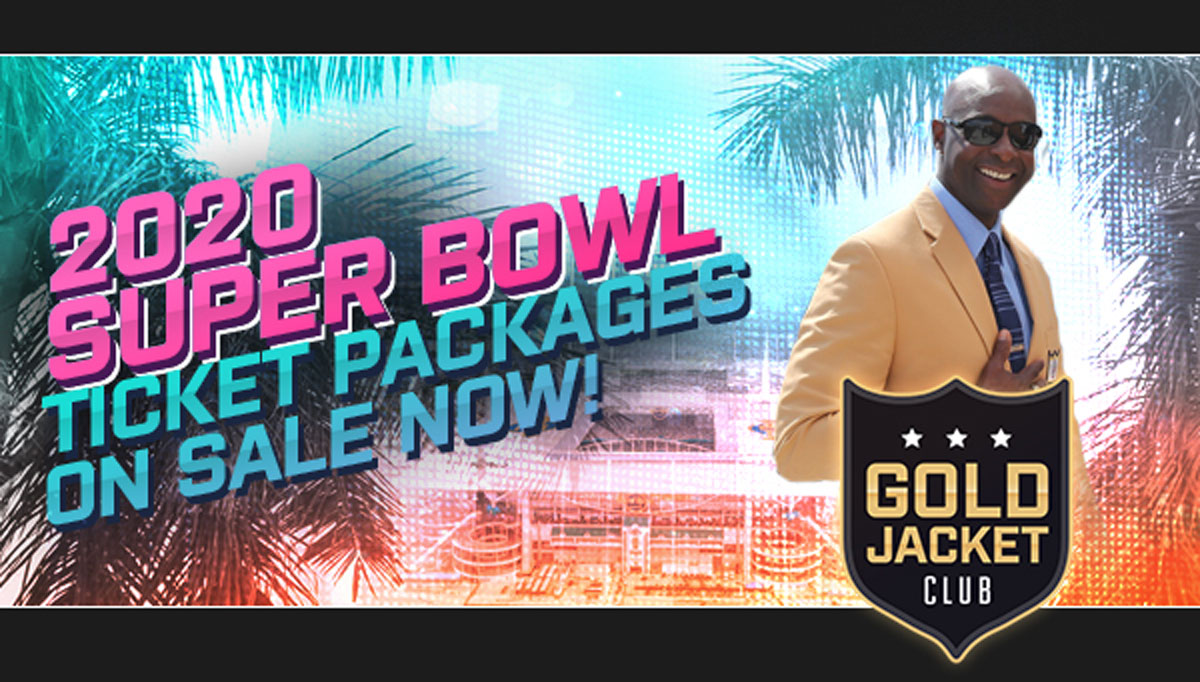 Jerry Rice entered the 1985 NFL Draft with a lot of fanfare thanks to his prolific collegiate career at Mississippi Valley State. While not playing D-1 college ball, Rice made a name for himself by breaking almost every Division 1-AA receiving record possible. In his junior year, Rice led the NCAA with 102 receptions and 1,450 receiving yards, including a single-game record 24-catch game against Southern University. Then in his senior season, Rice broke his own records with 112 catches and 1,845 receiving yards, plus an astronomical 27 touchdown receptions.

Those two unthinkable college campaigns led to the San Francisco 49ers biting on Rice with the 16th pick in the 1985 NFL Draft (a selection that they traded up for).

In his rookie season, Rice caught 49 balls for 927 yards and three touchdowns, showing glimpses of his potential while not fully breaking out.

Then — in the 1986 season — the story of Rice's legend started to be written. He accumulated 86 receptions over the regular season for a league-leading 1,570 yards and 15 touchdowns, earning his first Pro Bowl and First-Team All-Pro honors.

Rice's encore performance to his breakout year was even better, as he set the NFL single-season receiving touchdown record with 22 scores. This record stood until 2007 when Randy Moss scored 23 receiving touchdowns in a single season. 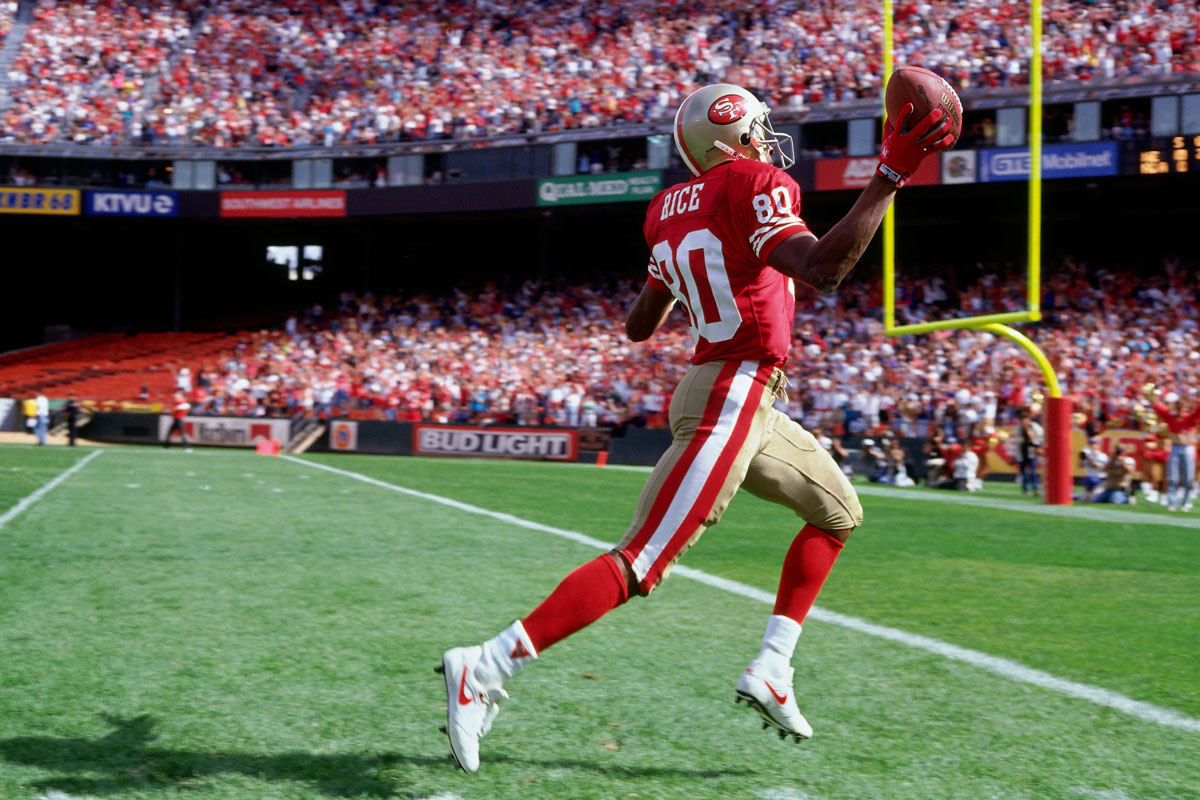 He led the NFL in touchdown receptions an impressive six times and had 10 or more touchdowns in nine of his first eleven years in the league. Rice was also a six-time receiving yards leader and recorded over 1,000 receiving yards in a season a whopping 14 times.

Rice's personal success also bore fruit for the 49ers over his tenure. With Hall of Famer Joe Montana slinging the ball to him, Rice helped lead San Francisco to three Super Bowl victories and was named the MVP of the 1989 Super Bowl.

After 16 years with the 49ers, Rice joined the Oakland Raiders following the 2000 season. As an invaluable part of Oakland's offense, Rice and the Raiders made it to the 2003 Super Bowl, but fell to the Tampa Bay Buccaneers.

After 20 seasons in the NFL, the most of any wide receiver in history, Rice called it a career. 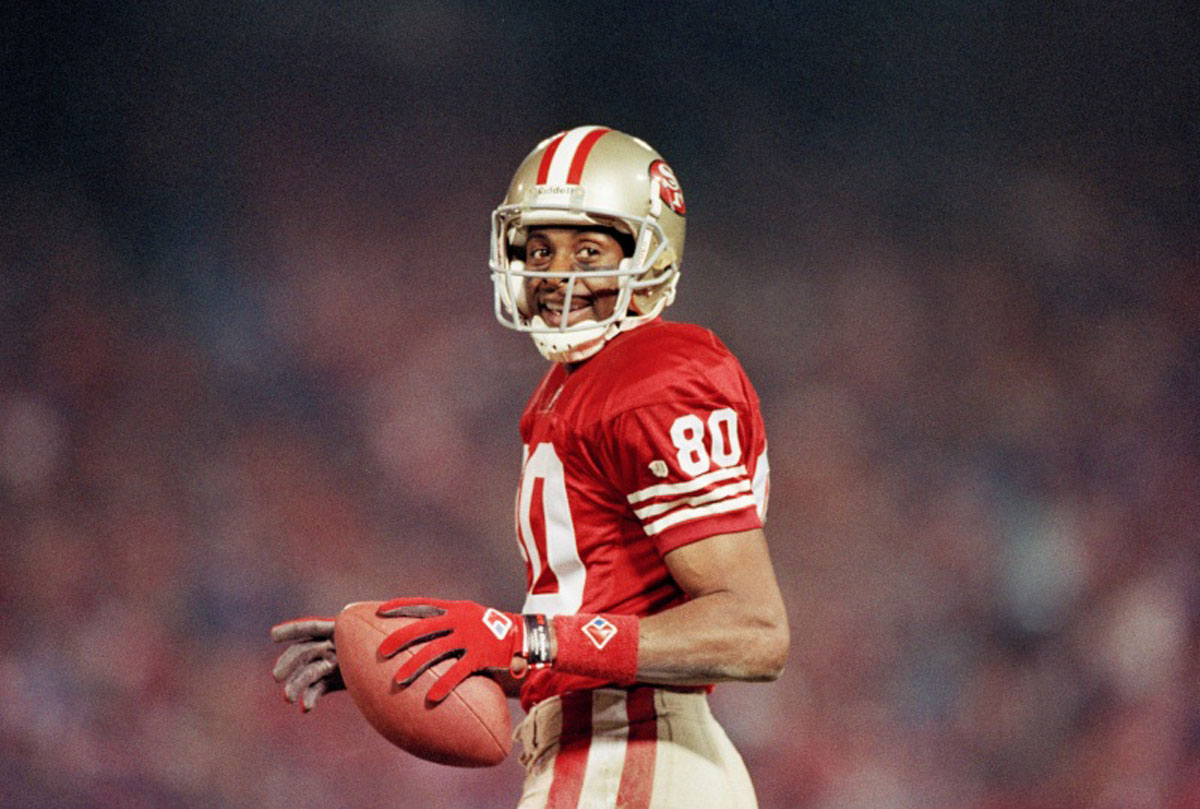