It’s the most wonderful time of the year! I’m not talking about the holidays, I’m taking about NFL Playoffs. Playoffs are just around the corner which means each game from here on out weighs heavily. As games intensify, we’re going to see some of the best football played all season. Several teams have already been eliminated from contention based on their current records. It’s no surprise that the Cleveland Browns have been cut with zero wins this season. It comes as a huge surprise that last year’s team to beat, the Carolina Panthers, are going to be eliminated and turned over their three-year NFC South Champions title to the Atlanta Falcons. With teams on the bubble and a few teams already locked in, we’re giving you our pre-playoff predictions.

Our pre-season predictions have turned out to be pretty spot on if you’ll excuse us for our Panthers fandom. We really, really wanted to see a 2003 rematch of the Panthers and the New England Patriots this Super Bowl. This looks highly unlikely unless the football gods shine down on the Panthers – we don’t see that happening. Better luck next year guys. 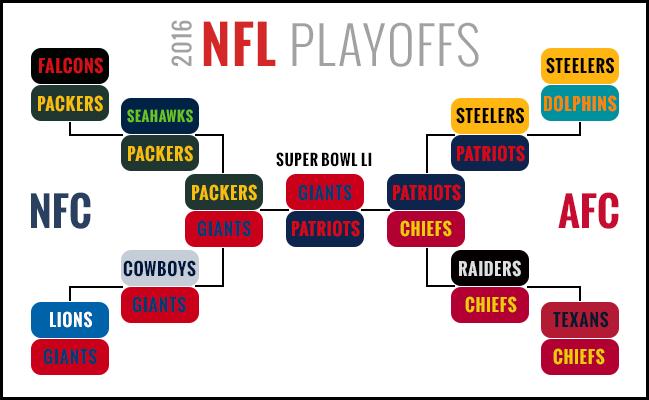 The AFC East has already been clinched by the New England Patriots – no surprise there. This is this 8th year in a row, they have taken home the AFC East Championship honor. They will be a dominate force in this year’s playoffs even without Rob Gronkowski. We’ve predicted them going all the way to Houston come February, we still stand by this.

The rest of the AFC has been busy making moves. We predicted a Steelers AFC North clinch but this one is going to come down to the wire. They face the Ravens on Christmas Day and this is going to be a game you won’t want to miss. Both teams can take the division, with a win making every single snap matter. We can’t wait to see how they handle the pressure. The Steelers will win this time and go on to a Wild Card game which they will also win. We’re going to see them face the Patriots in the AFC Championship game only to lose to Brady who’s playing the best football of his career this season.

This season could be the season everything changes for the Miami Dolphins. They could see a playoff run. They must face the Bills this week and win, which hasn’t happened in Buffalo since 2011. Should they make the playoffs, they will fall to whoever they play without their star quarterback. Don’t sleep on these guys, they show up to play.

The Raiders are the biggest story coming out of the AFC right now. We knew they would be stellar this year and they have not disappointed. They’re going to get a first-round bye in the playoffs only to fall to the Steelers in their first postseason game since 2002. Broncos fans will be delighted as they won’t even see the postseason this year – life without Peyton Manning has been rough.

We can’t forget the Chiefs and the Texans here. The Chiefs have been on fire this season and we can’t wait to see their appearance in the post season. The Texans will no doubt fall to the Chiefs making way for this team to be stomped on by the Patriots in playoffs week two. This will be one of the best games all season; we’re excited to see the results.

The NFC West has been clinched by the Seattle Seahawks and they’ve moved up in the rankings this week without doing anything. Seriously – they had a bye. The New York Giants win against the Detroit Lions helped the Seahawks tremendously. Speaking of the Lions, they are poised to take the NFC North from the Green Bay Packers this year. We did not see that coming earlier this season. The Packers, however, are on a hot streak and play Minnesota at home next. There is a likely chance they can sneak the NFC North title right from under the Lions.

The NFC is heating up and the Falcons have secured their place in the playoffs. They won’t get too far if Julio Jones doesn’t make a speedy recovery. He’s been out a few games and it has made a difference on the scoreboard. Right now, the Falcons are looking at the 3rd seed. They’ll face the Packers, who will take them down and head into week two of the playoffs.

You know who doesn’t have to worry about the first round of playoffs? The Dallas Cowboys. That’s right you cannot turn on your TV without hearing about the Dallas Cowboys. The Tony Romoless era has been good to the Cowboys and we don’t see them slowing down in their last two games. While they are the number one seed, their only kryptonite – the Giants, is hot on their heels for the division title. It would take some drastic measures but the Giants could snake the NFC East with a few miracles. If the Giants keep their composure in Philadelphia this week, we’ll see them in the postseason for the first time since 2011.

The world is hoping for a Patriots vs Cowboys Super Bowl but we are not so sure. The road for the Cowboys will be tough – the Packers are on fire, the Giants defense is a force of its own, and the Seahawks are facing the loss of Earl Thomas. Dak Prescott and Ezekiel Elliot are a deadly duo for defenses but can they be enough to bring this team to the Super Bowl? We don’t think this is their year.

Be at Super Bowl LI

Join us for the Super Bowl February 5th in Houston. We can get you access to some of the best seats in the stadium and you will enjoy a pregame hospitality experience complete with gourmet food, premium open bar, Pro Football Hall of Famer appearances, live entertainment and more!