The NFL Playoffs are set.

After 17 weeks of regular season play, the Baltimore Ravens and Kansas City Chiefs have locked in the top two spots in the AFC while the San Francisco 49ers and Green Bay Packers stood atop the rest of the NFC.

Here are the final Power Rankings for the NFL regular season from HOF Experiences. 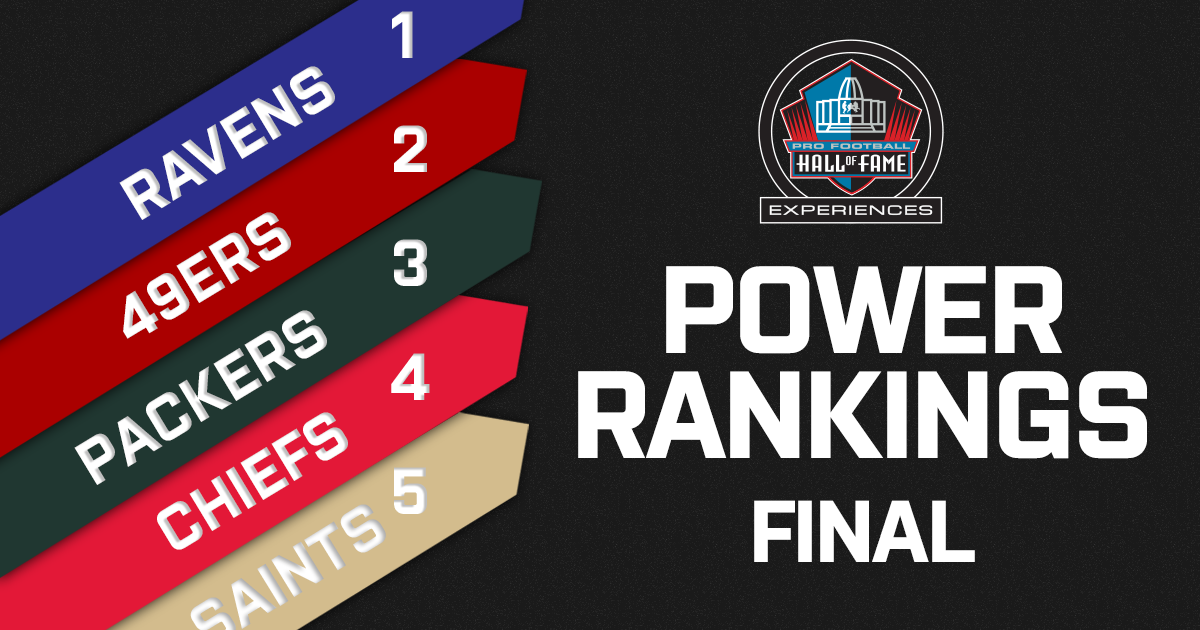 Playoff Seeding: No.1 Seed in AFC

After a 2-2 start, nobody saw the Ravens turning into what they've become.

As the winner of 12 straight games, Baltimore holds the league’s longest winning streak. This is mostly due to the prolific play from soon-to-be league MVP Lamar Jackson.

This season Jackson has thrown for 3,127 passing yards and rushed for a whopping 1,206, breaking Michael Vick's record for the most rushing yards by a quarterback in a single season.

The Ravens are playing the best football of anyone in the league and will have the luxury of a home crowd throughout the duration of their AFC run.

Playoff Seeding: No.1 Seed in NFC

The 49ers playoff fate was on the line in Week 17.

With a date against the Seahawks in Seattle, the 49ers had the chance to either secure the NFC West and the No.1 seed in the conference with a win or fall all the way to the No.5 seed and play on the road next week with a loss.

The former happened, as San Francisco escaped Seattle with a 26-21 win and a bye for next week.

The 49ers have ridden an impressive defense all season long, but the play of quarterback Jimmy Garoppolo picked up after the trade deadline acquisition of Emmanuel Sanders.

Playoff Seeding: No.2 Seed in NFC

The Packers quietly worked their way to becoming the NFC's No.2 seed.

While San Francisco and Seattle battled for top position in their division and the Saints 13-win season was marked by record-breaking performances from Drew Brees, the Packers took care quickly dug out their spot for the No.2 seed in the conference.

While the turnaround of the Packers in one season under head coach Matt LaFleur has been impressive, this is still Aaron Rodgers team come playoff time.

The 2-time MVP will be playing in the post season for the first time in three seasons.

Playoff Seeding: No.2 Seed in AFC

The Chiefs survived a slight mid-season slump while quarterback Patrick Mahomes recovered from a knee injury and have done enough to clinch the No.2 seed in the AFC.

Kansas City will host a Divisional Round matchup at Arrowhead Stadium in two weeks, with hopes of securing the two wins needed to get themselves to the Super Bowl after falling short in the AFC Championship last season.

Playoff Seeding: No.3 Seed in NFC

The fact that the 13-win Saints have to play in the Wild Card Round speaks more to the top-heavy nature of the NFC than any identifiable problem with New Orleans’ play this season.

As the No.3 seed, a Wild Card win will send them to Green Bay in two weeks for a matchup with the Packers.

Attend the 2020 Super Bowl with a 2020 Super Bowl Ticket Package from HOF Experiences. Packages include a game ticket, access to the Gold Jacket Club hosted by Jerry Rice and Cari Champion and much more.