Week 10 had everything a football fan could ask for.

Eleven of the 13 games on the weekend were decided by eight points or less, with the main event being a Monday Night Football classic between the San Francisco 49ers and Seattle Seahawks. 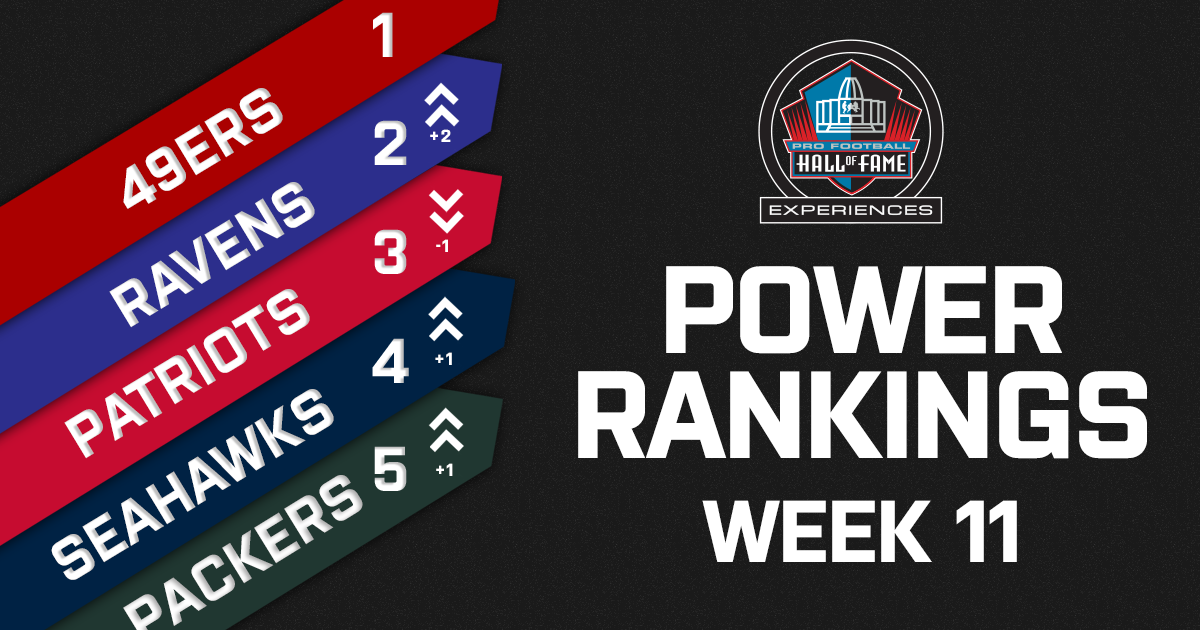 It took the game of the season for the 49ers to finally lose.

San Francisco jumped out to a 10-0 lead early against the Seahawks on Monday night, but several errors late in the game resulted in a 27-24 overtime loss to their division rival.

Jimmy Garoppolo was without several of his offensive weapons and it showed as he went 24-for-48 with one touchdown and one interception in the loss.

In Baltimore's 49-13 win over Cincinnati, Jackson threw 15-for-17 for 223 yards and rushed for 65 yards on seven carries. The performance earned the second-year quarterback his second perfect passer rating of the season and his 88-percent completion percentage is a single-game franchise record.

The Patriots are coming off a bye week but slipped down one spot in the rankings due to the success of the Ravens.

New England travels to Philadelphia this weekend with hopes of bouncing back from its first loss of the season.

While the Ravens may be the most exciting team in the NFL right now, the Seahawks are the must-watch team.

No game feels normal for Seattle this season, but Pete Carroll's team is thriving along with the chaos.

The Seahawks 27-24 overtime win over the 49ers on Monday night marked their second consecutive victory going past four quarters and the road only gets harder from here.

The Packers are one of the few teams in the league that are prepared for every and all weather conditions.

The tandem of Aaron Rodgers and Aaron Jones had no problem with Lambeau Field taking on a fourth quarter snowstorm in the Packers 24-16 victory over the Carolina Panthers. Jones rushed for three touchdowns on the day and Rodgers continued his MVP campaign with 228 passing yards in harsh conditions.

Be in Miami for the 2020 Super Bowl with HOF Experiences. 2020 Super Bowl Ticket Packages include a game ticket, access to Gold Jacket Club pre-game hospitality hosted by Jerry Rice, exclusive extras and much more.