Things are getting serious as we head into Week 13.

Playoff spots are on the line in the final five weeks of the season and every one of the teams in these Power Rankings is looking to claw their way into one of the coveted top spots to earn a Bye in the first week of the playoffs.

Here are your official Power Rankings for Week 13 of the 2019-20 NFL season from HOF Experiences. 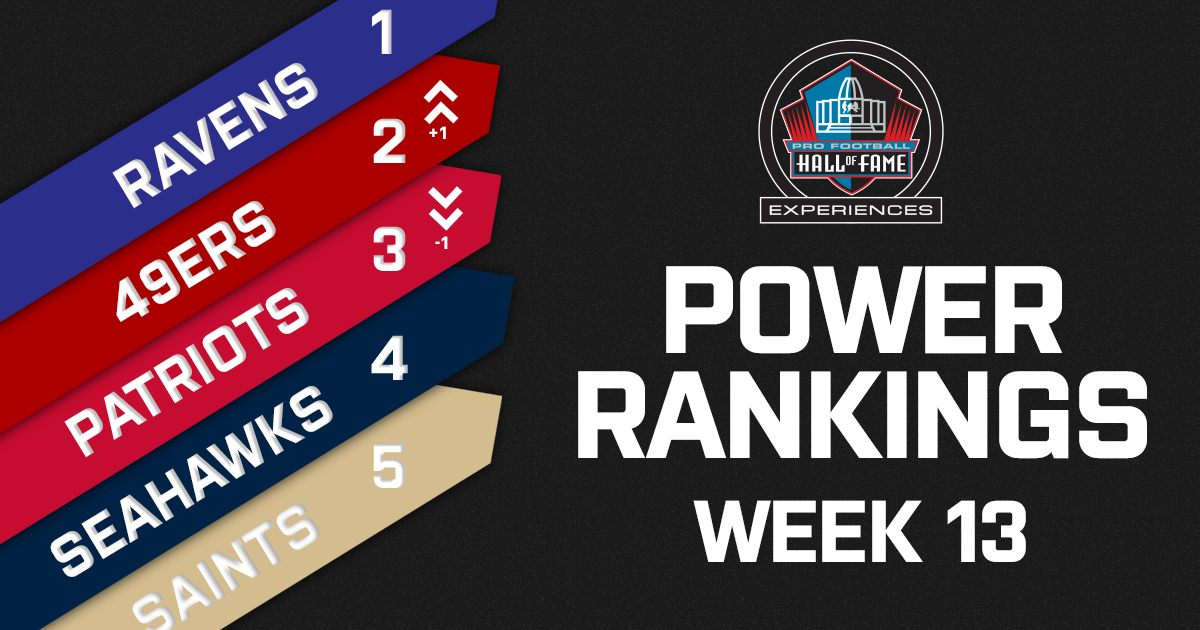 Lamar Jackson's MVP campaign continued on Monday Night Football as he threw for five touchdowns and rushed for 95 in Baltimore's 45-6 blowout of the Los Angeles Rams. Jackson was supported by Mark Ingram, who rushed for 111 yards and a score on 15 carries.

The Ravens defense has been elite in the past few weeks, allowing less than nine points per game in their last three games.

The Week 12 matchup between the 49ers and Green Bay Packers was hailed as a playoff preview but produced a different outcome than many expected.

Instead of a back-and-forth between two of the NFC's top sides, the 49ers dominated Aaron Rodgers and Green Bay, 37-8, to secure their grip on the conference.

The 49ers suffocated Rodgers in the win, holding the former to a mediocre 104 passing yards on 33 passing attempts.

The Patriots have scored just 30 points in the last two weeks, but don't count their offense out just yet.

In New England’s 13-9 victory over the Dallas Cowboys, the Patriots defense and special teams shined while Tom Brady and the offense managed the storm. It wasn't an encouraging performance from the offense, but New England finds a way to keep winning.

Most notably on defense was Stephon Gilmore, who picked off Dak Prescott and helped Cowboys star receiver Amari Cooper to zero catches in the win.

The Seahawks are now 6-0 on the road thanks to Russell Wilson and Rashaad Penny.

Penny carried Seattle to a 17-9 victory over the Philadelphia Eagles with 129 yards and one touchdown on 14 total carries.

Even without a game-changing performance from Wilson, he still threw for one touchdown to bring his league-leading total to 24.

The Saints are well on their way to a third-straight NFC South crown after their 34-31 win over Carolina on Sunday.

Brees finished the game an impressive 30-for-39 with 311 passing yards and three touchdowns, finding star receiver Michael Thomas 10 times in the victory.

New Orleans was the recipient of some good luck, though, as Panthers kicker Joey Slye missed a go-ahead 28-yard field goal with two minutes remaining.

Join HOF Experiences in Miami with a 2020 Super Bowl Ticket Package. Get a game ticket, access to the Gold Jacket Club hosted by Jerry Rice, the Gold Jacket Autograph Session and much more.