There’s only one quarter of the regular season remaining.

As teams fight for their final playoff pushes, there’s still movement at the very top with bye week spots still on the line.

Here are the official Power Rankings for Week 14 of the 2019-20 NFL season from HOF Experiences. 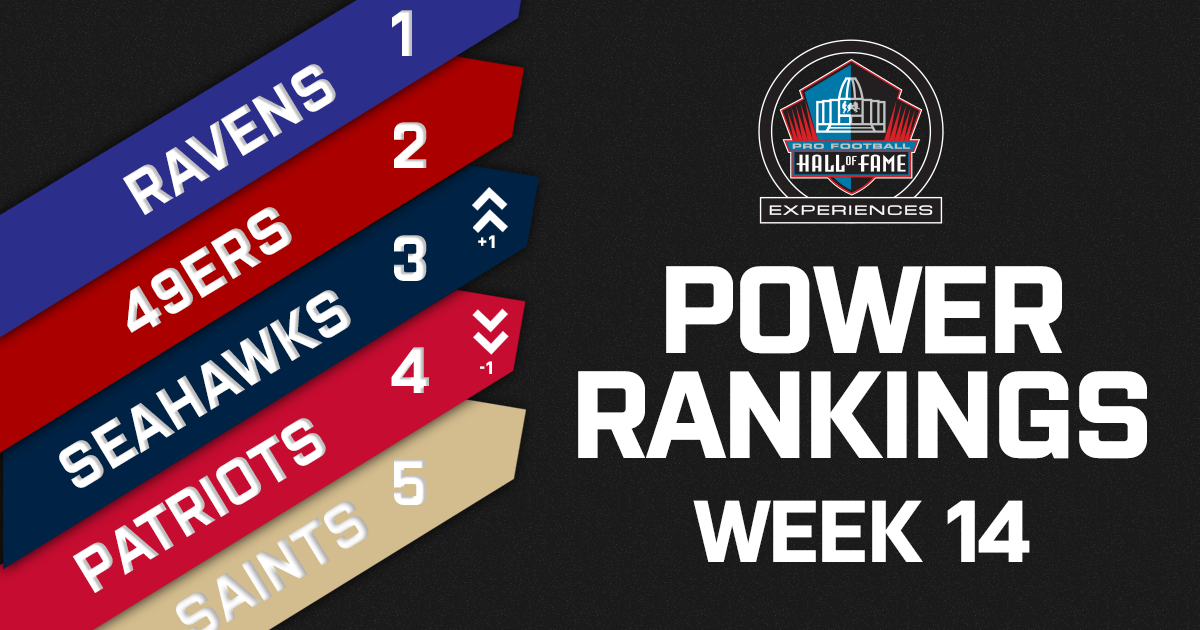 In a matchup perfectly crafted for these Power Rankings, the Baltimore Ravens extended their win streak to eight with a 20-17 win over the San Francisco 49ers on Sunday.

Lamar Jackson trusted his legs in the miserable weather conditions, rushing for 101 yards and touchdown in the victory.

But it all came down to Justin Tucker, arguably the best kicker of the decade, nailing a 49-yard field goal as time expired to move the Ravens into the top spot in the AFC.

The 49ers may be the toughest team to beat in the NFL.

Both of their losses have come down to the wire this season. Their first defeat came by way of the Monday Night classic against the Seattle Seahawks last month and their second was by a last-second field goal from the soaring Ravens.

While the Niners have now dropped to the second spot in the NFC West, there's hope that a Week 17 meeting rematch with Seattle will be for the division crown and a bye week heading into the playoffs.

The Seahawks took their spot atop the NFC West with a 37-30 win over the Minnesota Vikings on Monday night.

While some late game lapses helped the Vikings almost erase a 17-point Seattle lead, the Seahawks defense was able to hold Kirk Cousins and company on their final possession with under three minutes remaining in the fourth quarter.

As stated above, the following three weeks are paramount for the Seahawks as they are on a collision course with the Niners for their Week 17 matchup.

The Patriots offense is struggling, and it could be what costs them a bye week slot in the playoffs.

Tom Brady had no one to throw to in New England's 28-22 defeat to the Texans on Sunday night and looked frustrated every time he stepped back on to the sidelines.

While New England has the excuse of an inexperienced receiving corps and injured offensive line, they'll need to figure out how to make a lot out of a little if they hope to steady the ship.

The Saints got their win back.

After falling to the Falcons, 26-9, last month, many wrote New Orleans off as serious contenders in the NFC.

But the return game in Atlanta went the Saints way this weekend, as Drew Brees and company left the Mercedes-Benz Stadium with a 26-18 victory to clinch the franchise's third consecutive NFC South title.