In just one week, the landscape of the NFL changed drastically.

Drew Brees is out for up to two months with a thumb injury, Ben Roethlisberger has been ruled out for the season and Eli Manning has been benched in favor of Daniel Jones.

But even as the old guard seems to be on its way out of the league, a familiar face still sits atop the NFL through two weeks.

Each week, we will be breaking down the top five teams in the league and top contenders for the 2020 Super Bowl in our official Power Rankings.

This week's rankings are based on each team's performances through the first two weeks of the season. 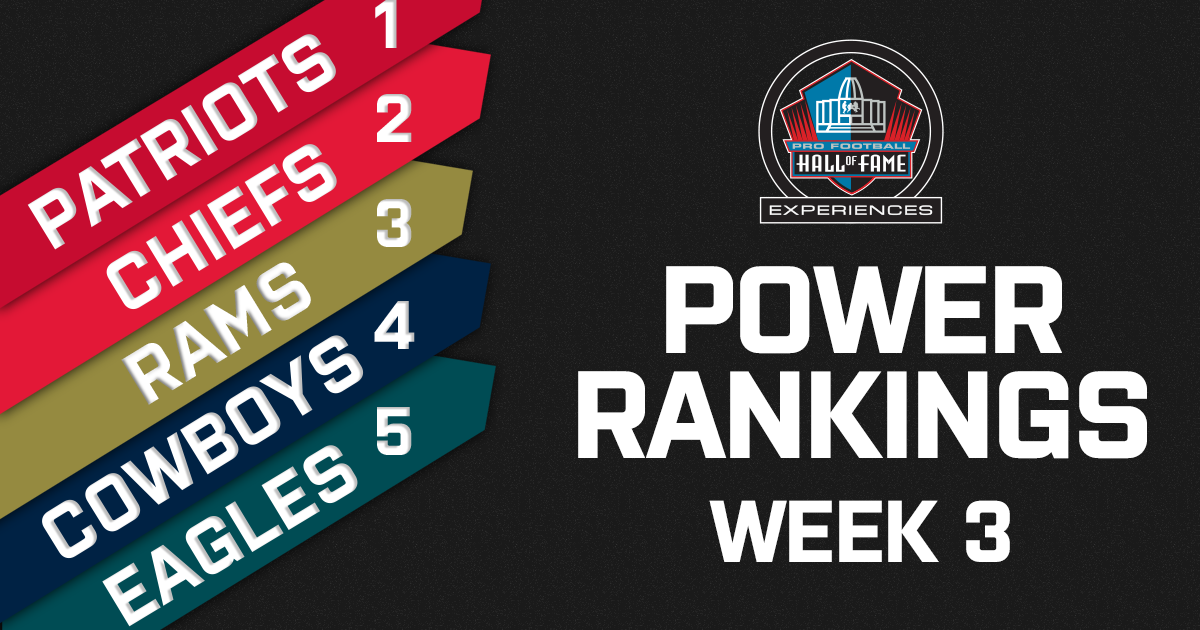 The Patriots successfully implemented Antonio Brown into their offense, as Brown went for 56 yards and a touchdown on four catches.

Even just two weeks into the season, whispers are going around about potentially another 16-0 season in New England.

When you have Patrick Mahomes behind center, it doesn't really matter who is catching the ball. That may be underselling the Chiefs' talent at receiver, but it's uncanny how there's been no lack in production even after Tyreek Hill suffered a broken clavicle in Week 1. In their 28-10 Week 2 win over the Raiders, the Chiefs depended on Demarcus Robinson, who went for two touchdowns and 172 yards on six catches.

Cooper Kupp is back and with a bang. The slot receiver who missed the back half of last season due to an ACL tear has already been fit right back into the Rams offense. Through two games Kupp has caught 12 passes for 166 yards, but his biggest play so far came on a 66-yard catch-and-run in the fourth quarter of Los Angeles' 27-9 win over the Saints in Week 2.

Jared Goff's favorite receiver is back and the Rams offense might be on the brink of matching last season's historic production.

Two weeks in, Ezekiel Elliott already looks to be in midseason form. After getting reacquainted with the Cowboys offense in Week 1, Elliott burst out for 111 yards and one touchdown in Dallas' 31-21 win over Washington.

Dak Prescott continued his impressive start to the season, throwing for 269 yards and three touchdowns against the Redskins. With a potential contract extension on the line, Prescott has been showing his worth through the first two weeks.

The Eagles may no longer be in the unbeaten ranks of the league, but there's reason to believe that they're still a top five team in this league currently. Mainly, Carson Wentz looks to be returning to his old self. Wentz dealt with the injury bug that plagued his team early in their loss to the Falcons and lead them back to gain a 20-17 lead with three minutes remaining.

While the Eagles defense couldn't hold on to the advantage, this game did answer our question about Wentz's ability to show up when his team need him most.

Get a 2020 Super Bowl Ticket Package

HOF Experiences wants to get you to Miami with a 2020 Super Bowl Ticket Package. Packages include a game ticket, access to the Saturday Autograph Session and the Gold Jacket Club hosted by Jerry Rice on Sunday.