We have officially reached the quarter point of the 2019 NFL season.

While there is still a ton of football to play, we know that there are two obvious frontrunners in the AFC and that the NFC could be anyone's to take.

Each week this season, we are breaking down the best five teams in the league and top contenders for the 2020 Super Bowl in our official Power Rankings.

These rankings are based off each team's performance through the first four weeks of the regular season. 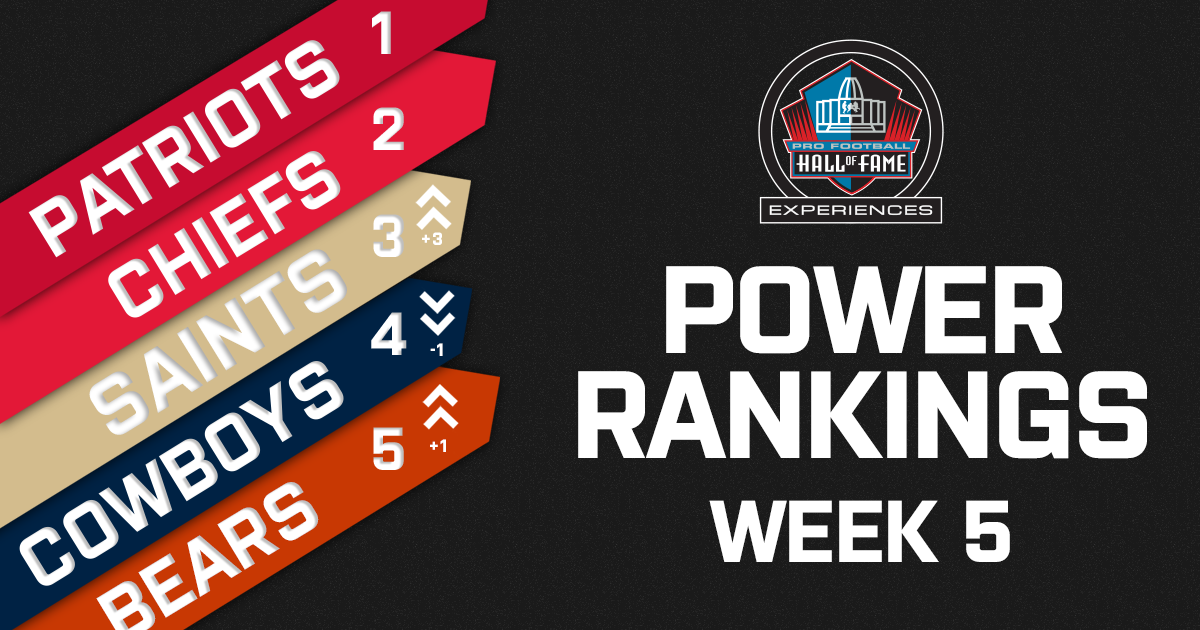 The Patriots defense is currently the best in the NFL and it showed in their 16-10 victory over Buffalo.

New England intercepted Bills starting quarterback Josh Allen three times before he was knocked out of the game in the third quarter. They added a fourth interception late in the fourth quarter as Jamie Collins picked off Matt Barkley on the Bills final possession of the game.

A future Hall of Famer at quarterback and an elite defense has many fans and media members alike penciling the Patriots in for a fifth Super Bowl appearance in six seasons.

At the quarter point of the season, it's apparent that the Chiefs defense will need the offense to drag them to the 2020 Super Bowl.

The Chiefs possess the game's most skilled quarterback and arguably the league's most talented offense, but their defense will need to play up to the challenge if they, and head coach Andy Reid, want to get over their playoff hump.

The Saints are not only surviving without Drew Brees, they're adapting.

A team normally praised for offensive output, New Orleans is dependent on their defense to pave the path forward while Brees is injured. Against the Cowboys on Sunday night, the Saints forced two fumbles on key plays and picked Dak Prescott off on the Cowboys final possession.

As for Teddy Bridgewater, he's doing everything that is asked of him as the temporary, but experienced, backup.

The Cowboys offense finally got off the rocket ship they've been strapped to for the first three games of the season.

After a prolific start for Dak Prescott, the Dallas quarterback came back to the ground in an uninspiring performance against New Orleans. After Ezekiel Elliott proved ineffective, Prescott and offensive coordinator Kellen Moore weren't able to right the ship and lead the offense on the road.

But even with the slip up against another NFC contender, this Cowboys team still has time to perfect their flaws.

No starting quarterback, no problem for Matt Nagy's team. There wasn't any confusion about the Bears identity this season as a defensive stalwart, but losing Mitch Trubisky in the first quarter of their Week 4 matchup with the Vikings only highlighted this point.

Led by Khalil Mack, the Bears dominated Minnesota's high-powered offense, holding them to six points. It's still early, but the Bears elite defense may be what separates them from the competition in a stacked NFC North.

As we head into autumn, the 2020 Super Bowl is closer than ever. Be in Miami for the biggest game of the season with a 2020 Super Bowl Ticket Package from HOF Experiences. Packages include premium seats at Hard Rock Stadium, access to the Gold Jacket Club hosted by Jerry Rice, exclusive extras and much more!

Click below and fill out the form to get more information on package options.