If there is one thing we've learned so far this season, it's that teams don't win a Super Bowl in September.

After terrific starts to the season, the Kansas City Chiefs, Dallas Cowboys and Los Angeles Rams have gone a combined 1-8 over the last three weeks.

But some heavy hitters remain. The New England Patriots and San Francisco 49ers remain perfect, while another bunch of NFC teams are stringing together wins.

As we are now one third of the way through the 2019-20 season, here are the official Power Rankings for Week 7 from HOF Experiences. 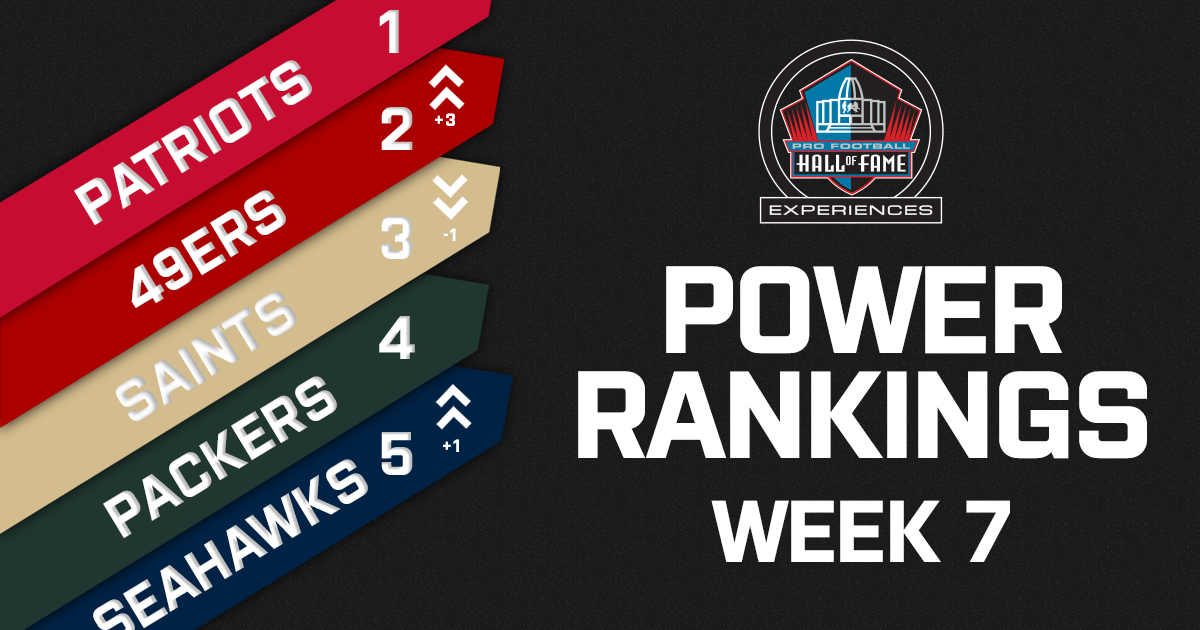 While the offensive unit tries to find its footing, especially in the run game, the Patriots defense is carving out their spot atop the AFC. In New England's 35-14 win over the Giants on Thursday night, the Patriots intercepted Daniel Jones three times and the special team's unit returned a blocked punt for a touchdown.

Historically, we know that the Patriots offense will figure itself out. But in the short term, the defense can take most of the credit for the hot start.

The San Francisco 49ers have already surpassed their win total from last year, accomplishing the feat in the least amount of games possible. The quick turnaround for the franchise is worth celebrating, but also a call for closer examination.

While Jimmy Garoppolo is the face of the franchise, it's the defensive side of the ball that has pushed the 49ers to the top of the NFC. San Francisco stifled the Rams offense in their 20-7 win over their divisional rival, allowing Los Angeles only 157 yards of offense in the dominant performance.

Teddy Bridgewater may not create a quarterback controversy in New Orleans, but the Saints have to thank their backup for avoiding disaster while Drew Brees is stuck on the sidelines. The Saints have gone 4-0 with Bridgewater behind center while Brees has been recovering following thumb surgery on his throwing hand.

Bridgewater has been a steady hand for New Orleans, but it's their defensive front that still has them in contention in the NFC. In the Saints' 13-6 victory in Jacksonville over the weekend, New Orleans held Gardner Minshew II without a touchdown for the first time in his short career.

The Packers have a dynamite rushing attack on their hands and it could be what helps them come out of the NFC North.

In Green Bay's 23-22 win against the Detroit Lions on Monday, the backfield tandem of Jamaal Williams and Aaron Jones exploded for 151 yards on 25 total carries, helping make their case as the most dangerous duo in the division.

Aaron Rodgers is also still — well, Aaron Rodgers. After a good-not-great start to the season, Rodgers seems to be flourishing under new head coach Matt LaFleur.

The Seahawks are a half game back from the division lead in the NFC West thanks to stellar production from their star quarterback through the first third of the season, and their offense seems to just be heating up.

The only knock on Pete Carrol's team is that they're rarely winning definitely. Of their five wins this season, four have been by four points or less. This could be a positive, though, come the postseason when games are tight.

Every week we get closer to the 2020 Super Bowl in Miami. Interested in attending with HOF Experiences? Click the link below to see all available 2020 Super Bowl Ticket Packages and fill out the form on the right to get more information on packages and inclusions!