The top contenders for the 2020 Super Bowl are starting to reveal themselves.

For the first time this season the top four spots remain unchanged, but a new contender has made their debut at No.5.

As we get closer to the midway point of the 2019-20 season, here are the official Power Rankings for Week 8 from HOF Experiences. 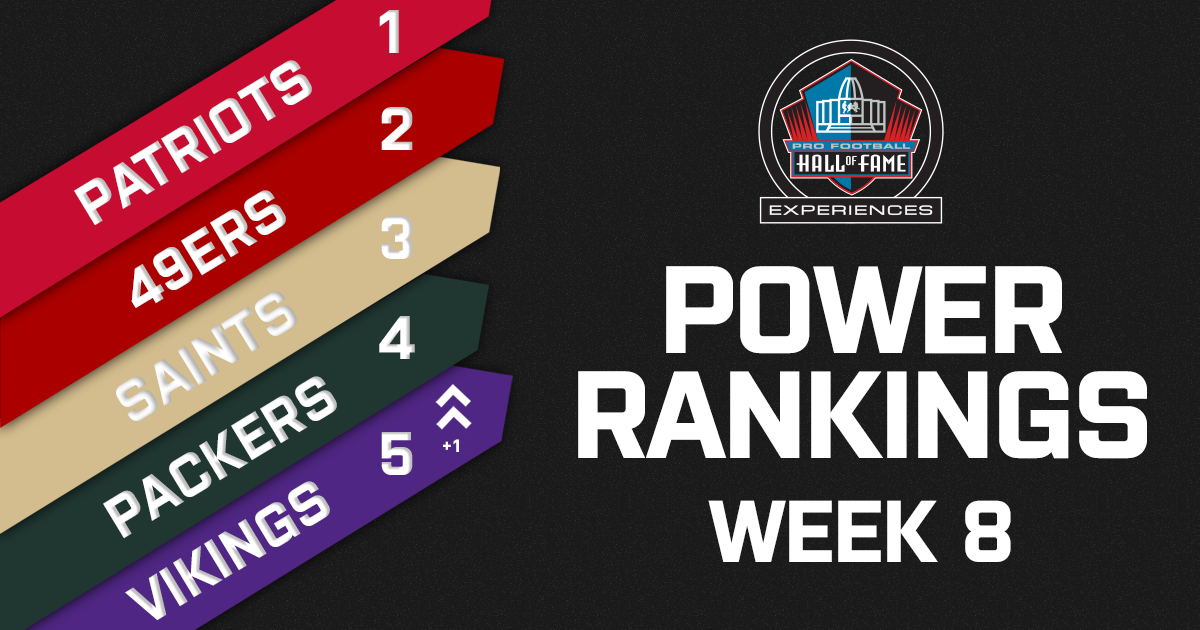 The Patriots linebacker corps calls itself "The Boogeymen," which is fitting after Sam Darnold said he was "seeing ghosts" on Monday night in the Patriots 33-0 victory over the Jets.

New England's defense is snagging the ball away from opponents at a record-setting pace — their 18 interceptions in seven games is the most since the Green Bay Packers had 20 interceptions at the same point of the 1996 season.

The defensive fortitude has given the Patriots offense time to find its rhythm in the face of injury, which should be expedited with the acquisition of wide receiver Mohamed Sanu from the Atlanta Falcons on Tuesday.

San Francisco survived the elements and pulled out a 9-0 win against the Redskins on Sunday in the nation's capital.

With sloppy field conditions altering both team's game plans, the 49ers and Redskins combined for 65 total rushing attempts and paved the way to the NFL's shortest game in a decade.

While the 49ers stay perfect and keep the top spot in the NFC, there's not much to take away from this game other than San Francisco surviving the elements. Their defense produced a shutout, albeit against an offense that wasn't hiding their intentions to run the ball on all three downs.

Teddy Bridgewater's tremendous run as Saints fill-in behind center continued this week, as the backup threw for 281 yards and two touchdowns in New Orleans’ 36-25 victory over the Chicago Bears.

New Orleans' offense is hitting all its strides in the absence of Drew Brees, making it a scary thought of what they can look like when their franchise quarterback returns to full health.

For the first time in his career, Aaron Rodgers had a perfect passer rating on Sunday.

Rodgers threw for 429 yards and five touchdowns in the Packers 42-24 win over the Raiders in Week 7, while also running for a touchdown.

The Packers defense provided stability throughout the first quarter of the season, but it looks like the chemistry between Rodgers and head coach Matt LaFleur is going to be what drives them through the remainderof the regular season.

Dare we say that Kirk Cousins is back?

After almost getting run out of Minnesota through the first four weeks of the season, the $80 million quarterback has played up to his price tag in recent weeks and the Vikings offense is soaring because of it.

Cousins threw for four touchdowns and a season-high 337 passing yards in the Vikings 42-30 win over the Lions on Sunday.

With a strong defensive front watched over by head coach Mike Zimmer, an elite running back in Dalvin Cook and Cousins playing like an MVP candidate, this Vikings team looks to give Green Bay a battle at the top of the NFC North.