As we head into Week 9, most teams have reached the midway point of their season.

While many teams are still finding their identity in hopes of a potential playoff run, a handful of contenders for the 2020 Super Bowl have already risen into the spotlight.

Here are your official Power Rankings for Week 9 of the 2019-20 NFL season. 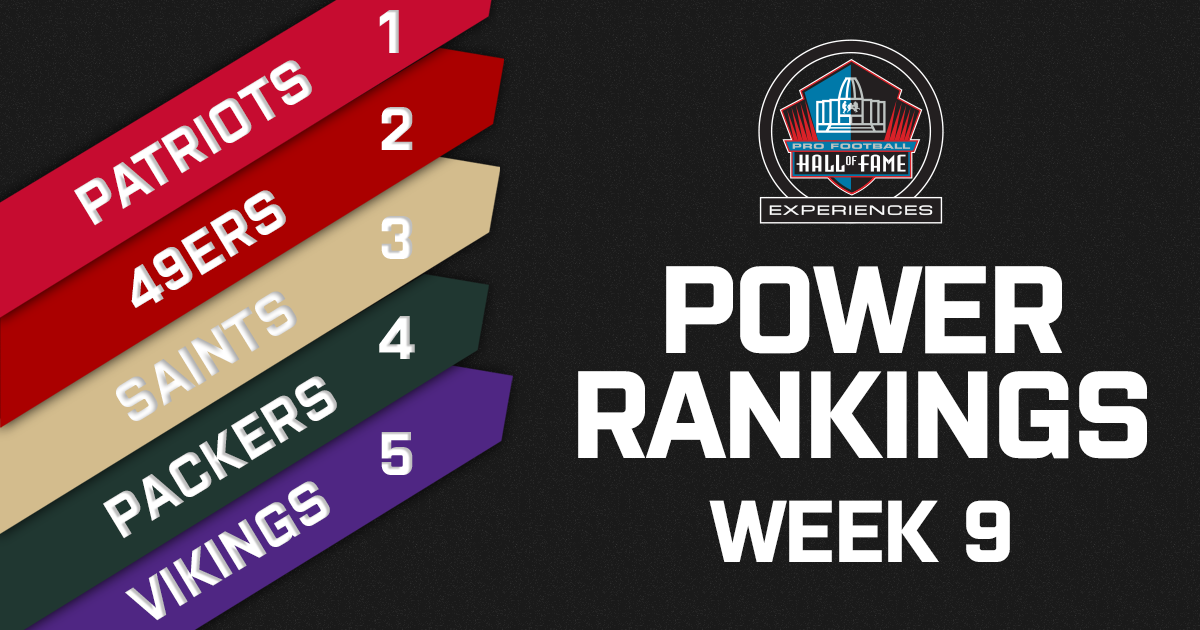 The Patriots defense did it again.

The mythologized defense front in New England let the way in the Patriots 27-13 victory over the Cleveland Browns on Sunday, forcing three turnovers in the first quarter en route to victory.

New England is outscoring opponents by 189 total points this season, the second highest mark ever through eight games.

The game-changing defensive end was all over the field in the 49ers 51-13 throttling of the Carolina Panthers, sacking Kyle Allen three times and picking off the backup quarterback for his first career interception.

But the offense is also pulling its weight. Running back Tevin Coleman scored four touchdowns on only 11 carries to help keep the Niners perfect, while Jimmy Garoppolo went 18-for-22 for 175 yards and a touchdown.

Drew Brees is back, and the rest of the league is on notice.

In his first game back since thumb surgery on his throwing hand, Brees threw for 373 yards and three touchdowns in the Saints 31-9 victory over the Arizona Cardinals.

The Saints weathered the storm excellently without their starting quarterback for five weeks, but have recovered from the injury bug that bit their offensive unit in the first quarter of the season.

Halfway through the regular season, it looks like Aaron Rodgers and head coach Matt LaFleur have taken a liking to each other.

Rodgers threw for 305 yards and three touchdowns in Green Bay's 31-24 victory over the Chiefs on Sunday night, adding another impressive road win to their resume.

The chemistry between head coach and quarterback seems to be at a season-high in Green Bay and could be what leads the Packers to another NFC North title. But there's still a lot of season left.

Playing on a short week didn't stop the Vikings momentum as Minnesota defeated the Washington Redskins, 19-9, on Thursday night for their fourth consecutive win.

The early-season questions surrounding Kirk Cousins and the limited targets for Stefon Diggs have been answered, as both players are performing at career-high levels in the past month.

The crowded NFC North has seemingly become a two-dog race, with the Vikings looking like proper competition for Rodgers and the Packers.

As we sit halfway through the regular season, now is the time to secure your 2020 Super Bowl Ticket Package from HOF Experiences. Click below to see all available packages, including game tickets, Gold Jacket Club hospitality and much more.