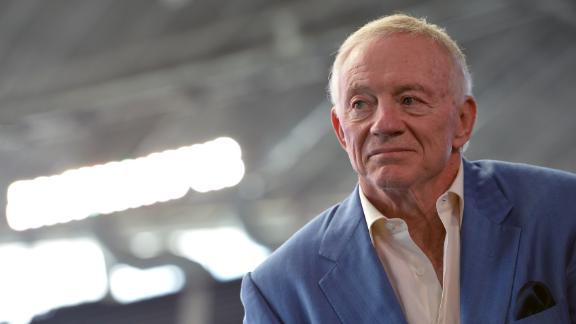 We’re still getting to know the Pro Football Hall of Fame Class of 2017 around here. Today, we’re bringing you the story of one of the most well-known names in football- Jerry Jones. Jones is living proof that being a player isn’t the only way to go down in history as a football legend. As the owner of the Dallas Cowboys, Jones is being inducted into the Pro Football Hall of Fame this August with the Class of 2017. Jones will be inducted alongside Morten Andersen, Terrell Davis, Kenny Easley, Jason Taylor, LaDainian Tomlinson and Kurt Warner.

Jones is an American businessman known for turning the Dallas Cowboys franchise into a winning team with a lasting legacy. Jones purchased the Dallas Cowboys for 140 million dollars in February of 1989. For the last 28 years, he’s made decisions that have placed the Cowboys as one of the most profitable sports teams in the world. One of the first decisions he made was to bring in Jimmy Johnson as the head coach. With this choice, he solidified a change in Cowboy history with three Super Bowl wins in his first seven years of ownership.

Jones has seen his team appear in 13 playoff appearances and has drafted 32 different players who have gone on to appear in a combined total of 107 Pro Bowls. In May of 2009, he opened the doors to the AT&T Stadium in Arlington, TX which has become one of the most renowned stadiums in American sports. Jones continues to be an integral part of his team’s journey.

Jerry Jones not only looks out for his players and organization, he’s a pillar of excellence in his community. He respects the United States Military and supports their efforts whenever he can. This is displayed each Thanksgiving during the Cowboys half-time celebrations. Jones is committed to making the NFL a stronger organization and using the power of the NFL to influence youth.

You can see him and his team at this year’s Pro Football Hall of Fame Enshrinement Week Powered by Johnson Controls in August. The Cowboys will face the Arizona Cardinals on Thursday evening while Jones and the rest of the class will receive their Gold Jackets on Friday night. The Enshrinement Ceremony will take place on Saturday followed by the Concert for Legends on Sunday. While each of these events is spectacular they are made even more memorable with the events surrounding them.

Be in Canton with us unlike ever before with access to the hottest events of the weekend. Class of 2017 autographs, exclusive parties, and even breakfast with the brand-new busts are all included with a 4-Day Diamond package from Hall of Fame Experiences. Check out the other packages we offer by clicking the link below or calling 844.751.0532.