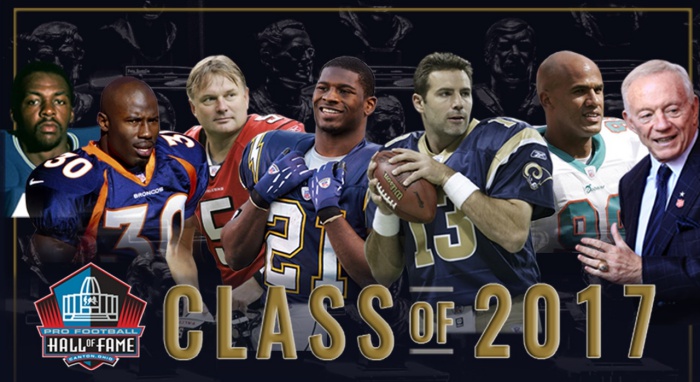 Running Back Terrell Davis has something big to celebrate this year! He’s being inducted into the Pro Football Hall of Fame. This iconic player is making his way to Canton, Ohio in August to be enshrined in bronze for the rest of all time. He will be remembered as one of the greatest running backs of all time.

This sixth round draft pick in 1995 went on to make history with the Denver Broncos. 7 seasons and 78 games allowed Davis to smash records. He will be remembered as one of the best running back to have played the game – for good reason. Davis made a big splash when he earned starting tailback position as a rookie. He hit the 1,000-yard mark and added career-high 49 receptions for 367 yards in his first season. In his second season, he gained 1,538 yards rushing. This was the year Davis was named Offensive Player of the Year. In his third season, he rushed for 1,750 yards and scored a league-high of 15 touchdowns. Davis walked away with his first Super Bowl ring that season.

He wasn’t done breaking records yet. In his fourth season with the Broncos, Davis became the fourth runner in NFL History to rush for 2,000 yards in one season. He led the NFL with 21 rushing touchdowns that season. He helped the Broncos bring home their second straight Super Bowl title. He earned MVP honors in Super Bowl XXXII after rushing 157 yards, 3 TDs in a victory over Packers. Davis also set NFL playoff record with seven straight 100-yard performances spanning 1997-98 postseasons. He scored 8 rushing touchdowns in his ’97 playoff run.

In the 1998 playoffs, Davis rushed for franchise postseason-record 199 yards against the Dolphins in the divisional playoff. He rushed 167 yards vs. the Jets in the championship and 102 yards in Super Bowl XXXIII victory over Falcons. His career was brought to a halt after a devastating knee injury limited him to just 17 games over his final three seasons.

This three-time All-Pro selection deserves to be in the Hall of Fame and we’re thrilled to see it happen this year. When you rush for 7,607 yards and score 60 touchdowns in just 78 career games, you’re a football god.

With an Official HOF Experiences ticket package, you can be there to celebrate the career of Terrell Davis as he becomes enshrined into the Pro Football Hall of Fame.