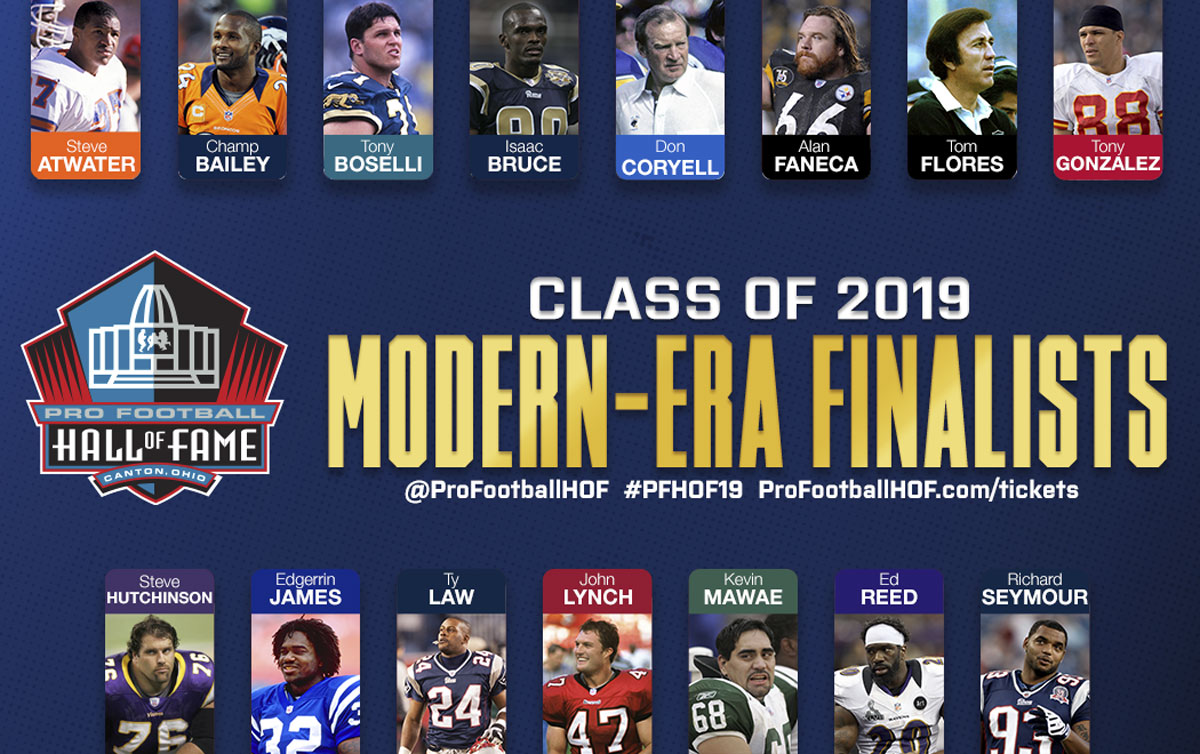 The Pro Football Hall of Fame has announced its 15 modern-era finalists for the Class of 2019.

A group that started at 102 nominees has been cut down to this elite selection of players and coaches, so we're taking time to look at each finalist before the final decision on the Class of 2019 is announced during 2019 Super Bowl weekend in Atlanta.

To be elected into the Hall of Fame, a modern-era finalist must get a minimum positive vote of 80 percent when selection committee voting takes place.

In the 1990's, it was nearly impossible to talk about the Denver Broncos defense without first mentioning free safety Steve Atwater.

While John Elway was considered the orchestrator of the Broncos back-to-back Super Bowl wins in 1997 and 1998, Atwater deserves an equal amount of credit for being the defensive anchor in the secondary that helped lock down opposing offenses en route to the Lombardi Trophy.

As the 20th pick in the 1989 NFL Draft, Atwater came out of the University of Arkansas with a bevy of expectations. Few players live up to the hype of a first round billing, or at least can't maintain consistency, but Atwater proved the naysayers wrong. Atwater was an eight-time Pro Bowler, including a run of seven-straight selections from 1990 through 1996.

While roaming the secondary, Atwater was still known more for his physical presence than his ball-hawking ability. He accumulated 1,180 tackles over the span of an 11-year career, averaging over 107 tackles per season. Atwater was named First-team All-Pro twice and was a member of the NFL 1990's All-Decade Team. 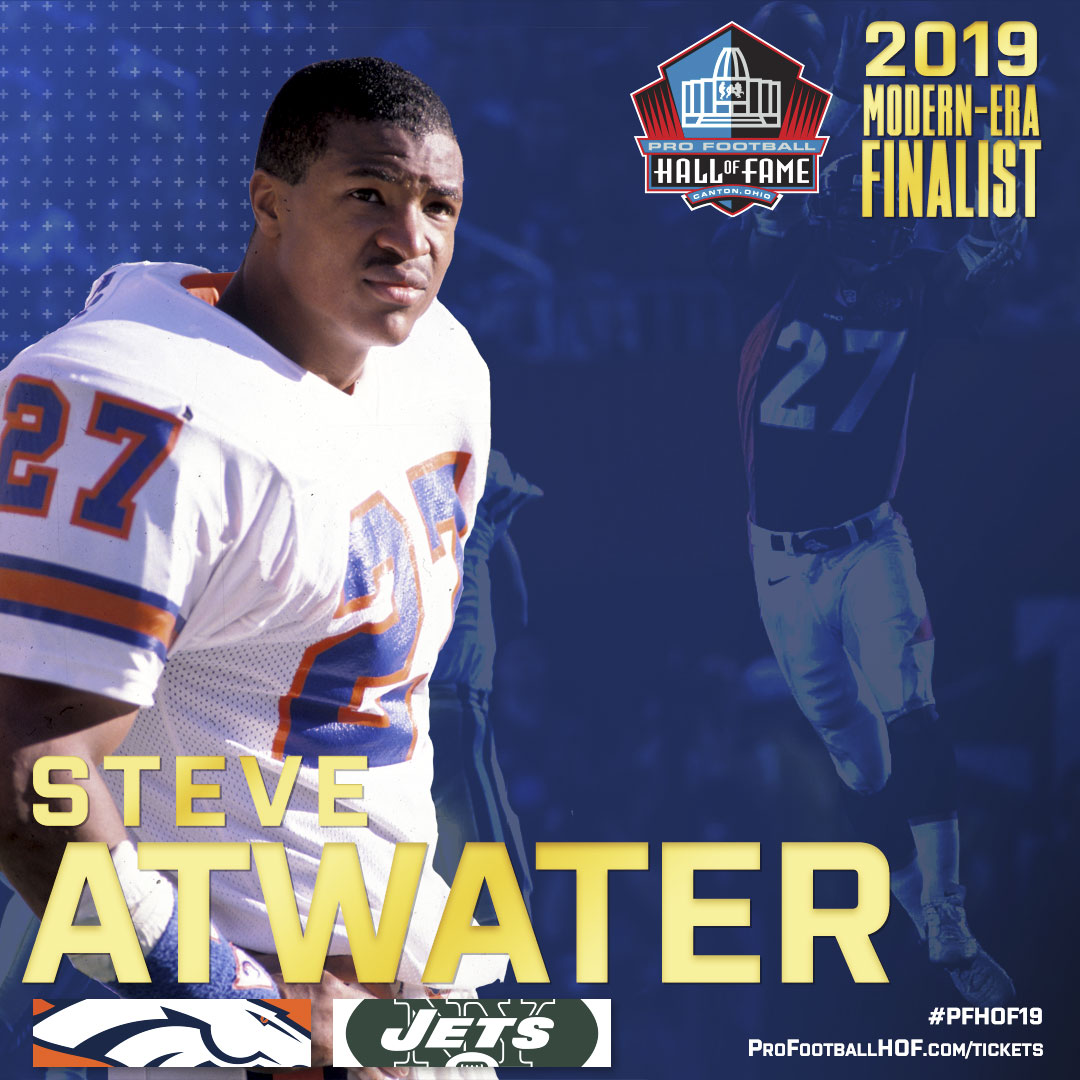 What Steve Atwater was for the Broncos secondary in the 1990's, Champ Bailey was during the 2000's.

Coming out of Georgia as a highly touted prospect, Bailey was selected seventh in the 1999 NFL Draft by the Washington Redskins. Bailey spent five seasons with the Redskins, being named a Pro Bowler four times as a part of the organization.

Before the 2004 season, Bailey was traded to the Broncos in exchange for running back Clinton Portis. He went on to play 10 seasons in Denver, becoming a staple of the defense and intercepting 34 passes over the decade with the Broncos.

His most prominent season came in 2006 when he led the NFL with 10 interceptions and was named First-team All-Pro for the third consecutive year.

Bailey finished his career with 12 Pro Bowl selections — the most ever for a defensive back. 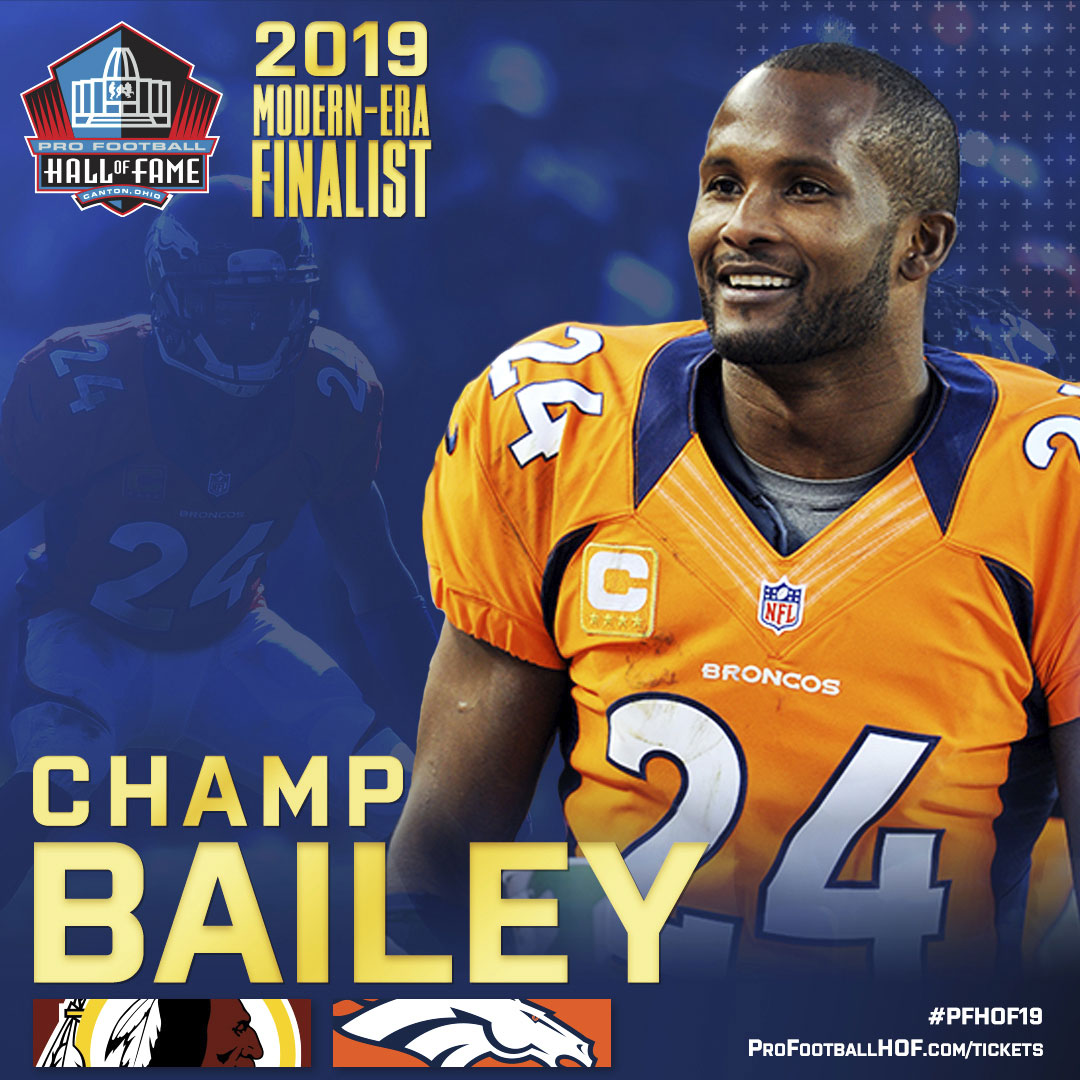 Tony Boselli has the honor of being the first-ever draft pick of the Jacksonville Jaguars. Before entering the league in 1995, the Jaguars selected Boselli with the No. 2 pick in that year's draft to spearhead the new franchise's offensive line.

Boselli used his large 6-foot-7 frame to immediately shoot up the ranks as one of the game's best tackles within two seasons. His combination of size and unusual agility for his height made him a force to be reckoned with inside of Tom Coughlin's offense.

While his career only lasted seven seasons, Boselli left a colossal footprint in the game, and for the Jaguars franchise specifically. His football lifespan was cut short due to a shoulder injury sustained during the 2001 season, but that hasn't stopped Boselli from knocking on the front door of the Hall of Fame. This is the former tackles third time being named as a finalist for a spot in Canton.

Over his seven year career, Boselli was named a Pro Bowler five times, and made First-Team All-Pro three times. He is also a member of the NFL 1990's All-Decade Team. 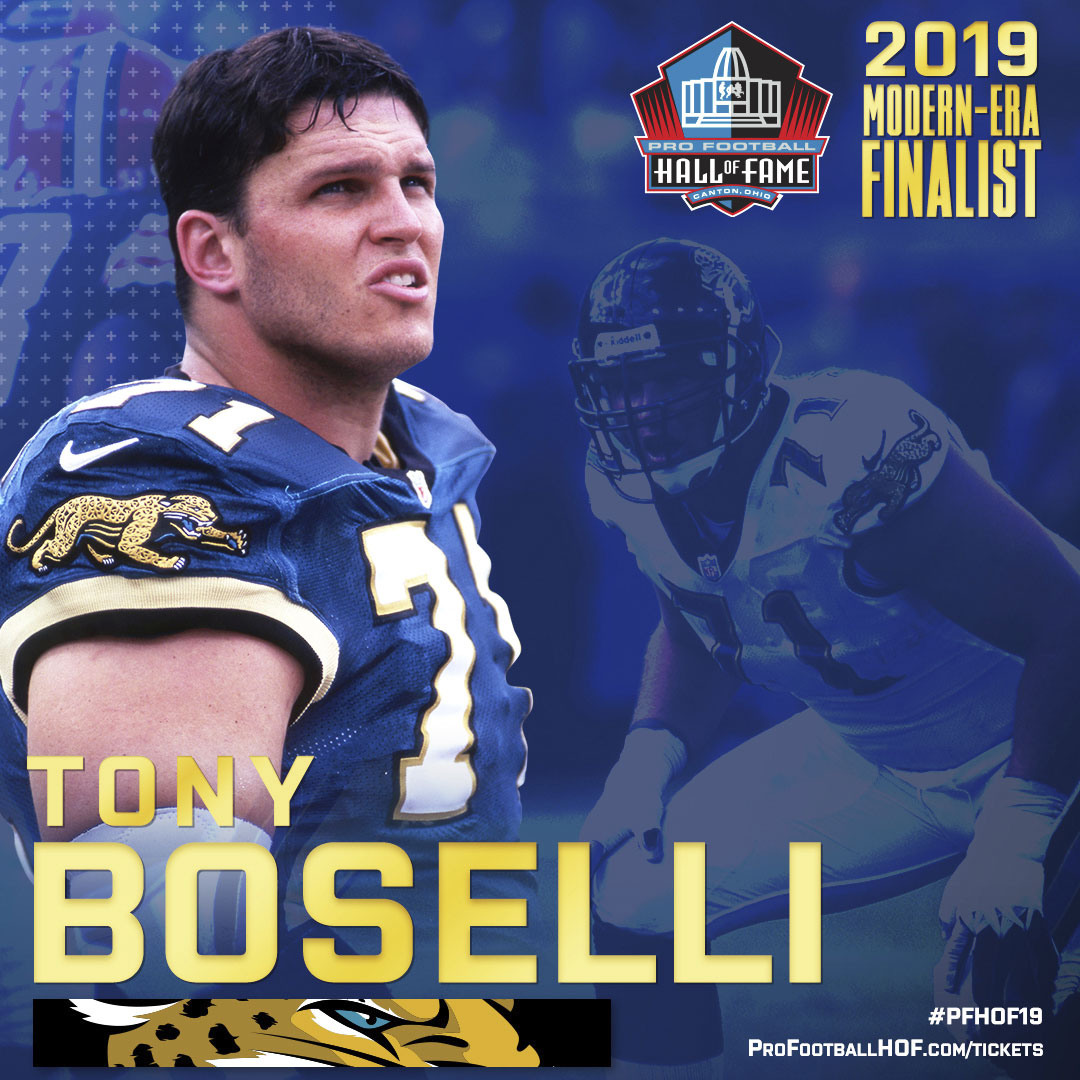 Your offense doesn't get heralded as "The Greatest Show on Turf" without a star wide receiver leading the charge. While Kurt Warner was earning most of the praise for his superhero-like numbers as a part of the early 2000's St. Louis Rams offense, it was Isaac Bruce playing the role of Superman, not Robin, to Warner's Batman.

Both were equal contributors, and played off of each other's skills to create one of the most eye-catching offenses the league has ever seen. With Warner's induction in 2017, Bruce is now looking to get his own bust into the halls of immortality on his third try.

Bruce was one of the main cogs in the Rams' offensive machine that led them to victory in the 2000 Super Bowl. During that season, Bruce caught 77 passes for 1,165 and 12 touchdowns. Those results earned him a First-team All-Pro nod and a second trip to the Pro Bowl.

Bruce finished his career as the Rams all-time leader in receptions (942), receiving yards (14,109) and receiving touchdowns (84). 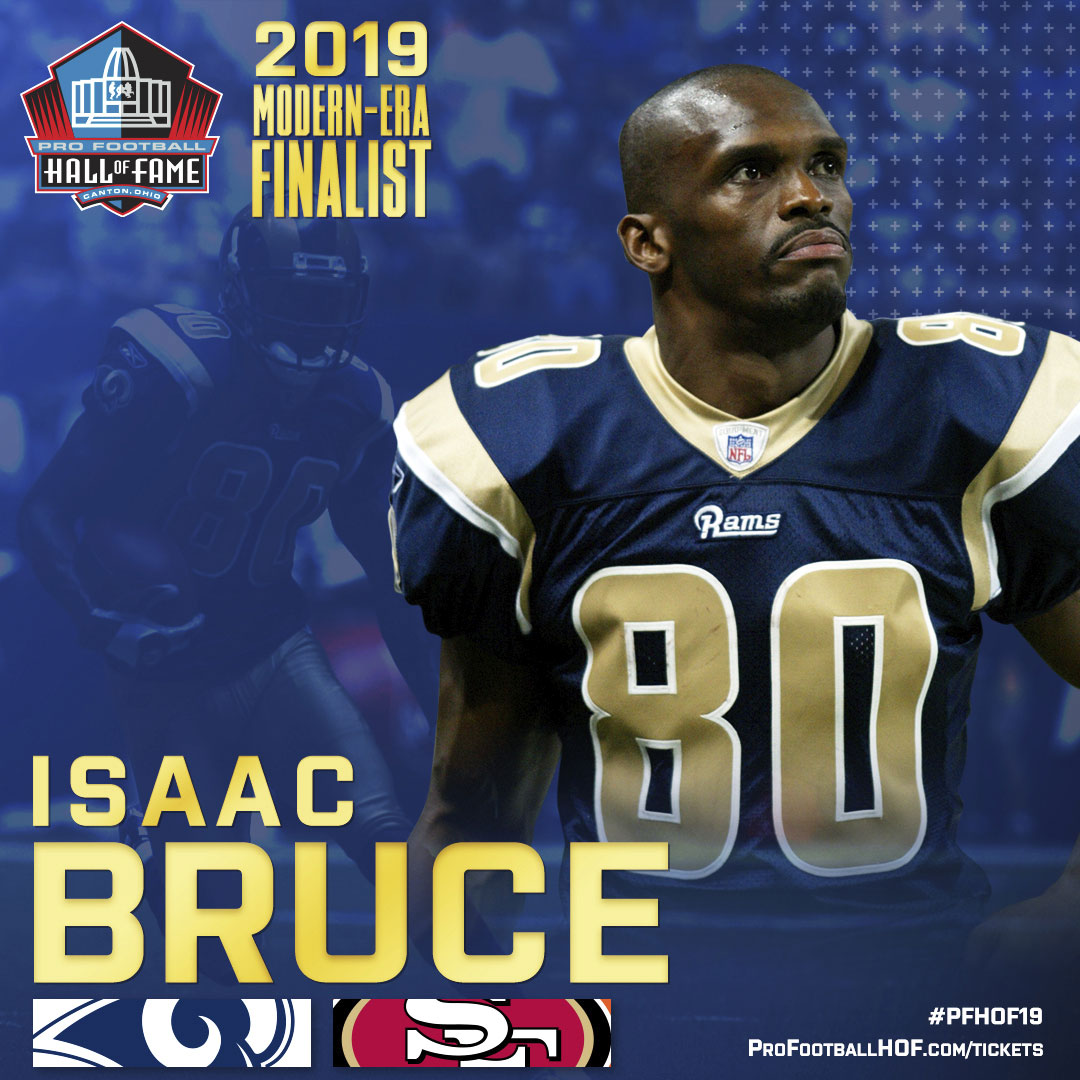 For the fifth time in his 32 years of eligibility for the Pro Football Hall of Fame, Don Coryell has made it as a finalist.

Known as an innovative of the modern offensive scheme, Coryell was famously nicknamed 'Air Coryell' for his pass-first agenda and single-back schemes.

Coryell first began his NFL head coaching career with the St. Louis Cardinals, but it was with the San Diego Chargers that his career, and legacy, really began to take off. Under the leadership of Coryell, the Chargers led the NFL in passing for seven out of eight years, solidifying his place as an offensive mastermind.

Coryell passed away in 2010, but his mark on the game is still visible week by week. As most of the league's offenses have shifted to a pass-first mantra, it's hard not to remember the original innovator who got the movement started. 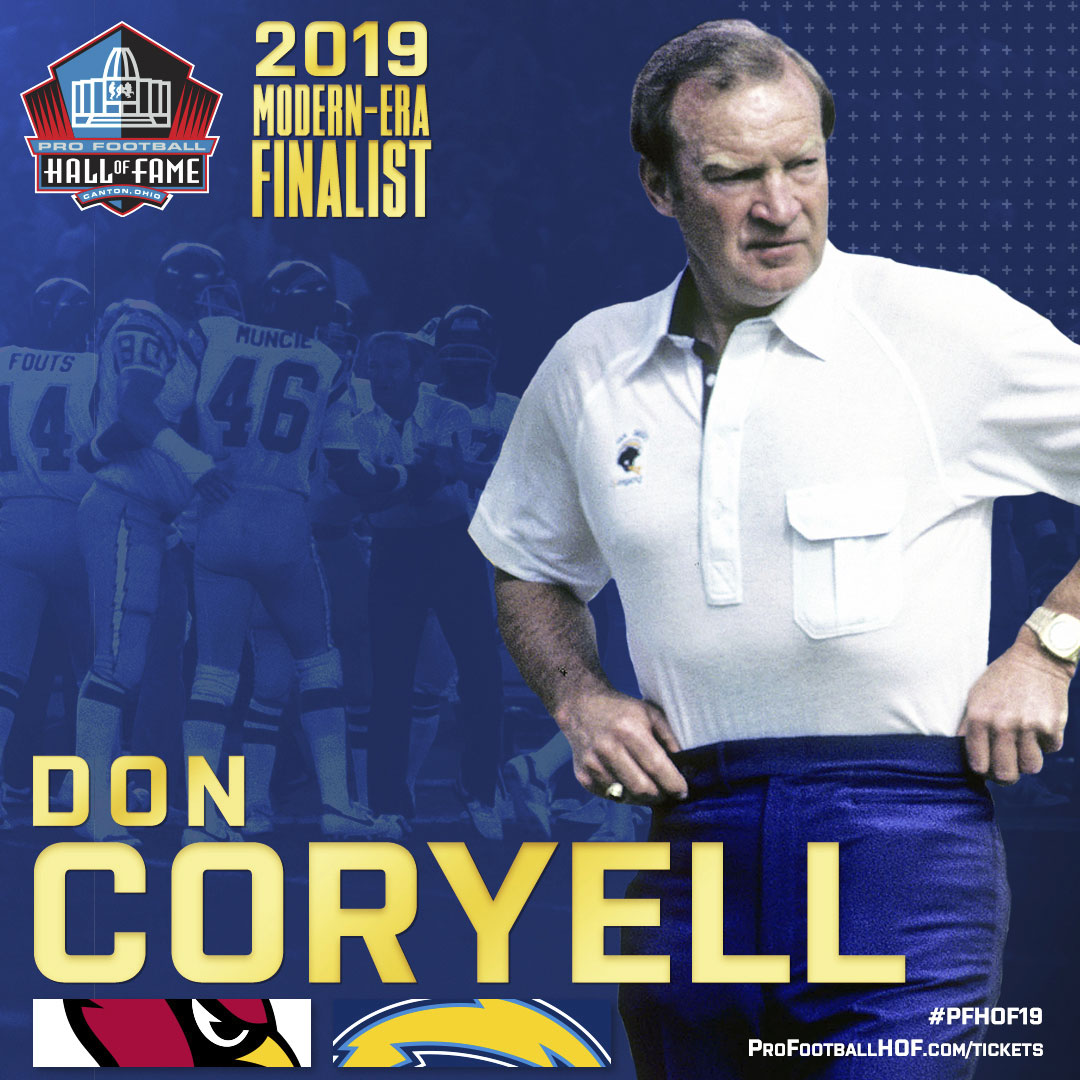 Get an Official Ticket Package for Enshrinement Week 2019

Join us in Canton to see the Class of 2019 be enshrined! With an Official Ticket Package from Pro Football Hall of Fame Experiences, you can go behind-the-scenes at the biggest ceremony and celebration that the sport offers. Choose between a four-, three-day or single day package to get the ultimate football experience.