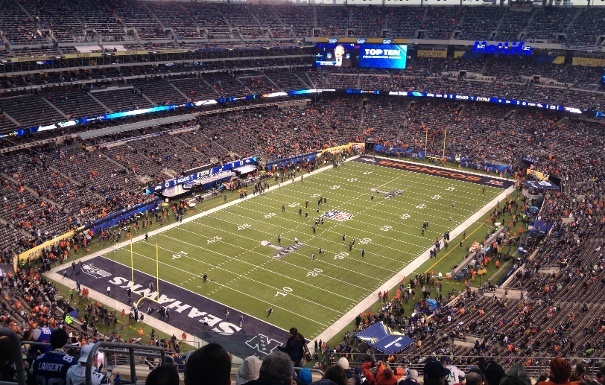 Our HOF Experiences staff has quite the opinion when it comes to football and we’re making some big 2016 season predictions. Last week, we discussed some of our picks for this year’s NFL Season and we couldn’t wait to share the rest. The Super Bowl is our favorite game of the year for the most obvious reasons, but the road to get there is a long one. We’ll spend every Sunday, Monday, and Thursday for 17 weeks glued to our TVs for all of the regular season football action. Come February 5, 2017, you’ll find us in Houston, TX for the biggest game of the year!

It’s hard to believe that 32 teams compete for just two spots in the Super Bowl each year. You never know how football is going to turn out, but you sure can hope your team makes it all the way.  First up are our picks for AFC and NFC Champions, aka the teams that will compete in the Super Bowl. While we only have three contenders for the AFC top spot, they were the obvious choices with strong fan support. The NFC is proving to be the stronger conference, making our staff scratch their heads and go with their hearts.

The Steelers will be a top team this year, no denying that. Will they have the gusto to get them to the Super Bowl? Maybe. They will rely heavily on wide receiver Antonio Brown and running back Le’Veon Bell to make all of their memorable plays. Ben Roethlisberger is a consistent and strong quarterback who makes wise decisions, but he’ll need to stay healthy to make this team work. They have a new tight end, Ladarius Green, and they are hopeful he will be a key player in the red zone. They have boosted their defense this offseason with the addition of corner Artie Burns, safety Sean Davis, and defensive tackle Javon Hargrave. They are hoping to boost their number 21 rank in defense to match their number 3 offense ranking. Lucky for this team, they are the strongest in their division, but the Bengals will be a force to be reckoned with.

The Bengals made our contenders list after their huge 2015 season. Losing to the Steelers in a wild card showdown, this team is looking for vengeance. They want a chance at the Super Bowl quite possibly more than any other AFC team. They will need to step up and prove themselves this season. They have a powerful quarterback in Andy Dalton and pairing him with running back Jeremy Hill and wide receiver A.J. Green makes them virtually unstoppable. They have a dominant defense and a fairly easy schedule. Execution is key here; with so much talent there is no reason this team should not make it through to the playoffs and take this division.

The Patriots, if we’re being honest, are the team to beat in the AFC this year. Tom Brady will be out the first four games which may start the Patriots off with a few losses but they will rebound and make the playoffs. The defense will be their saving grace this season, but we all know the defense cannot win the game alone. In Brady’s absence, Jimmy Garoppolo has big shoes to fill and we’re not sure how he will react under the pressure. Fortunately for Garoppolo, he will have Rob Gronkowski and Julian Edelman as targets. If their offense line can stay healthy, they will be able to take on almost every team on their schedule. They will crush everyone in the AFC East, but we see them struggling with the Cardinals, the Steelers, and the Seahawks.

The Seahawks are always a fan favorite. They have made our list of contenders because of their consistency and leadership. They also have a fairly easy schedule by their standards which, in this case, will make a difference for them. A now healthy tight end, Jimmy Graham is looking to connect with quarterback Russell Wilson often this season. They have overhauled their offensive line and it looks promising. Their tried and true receivers Jermaine Kearse and Doug Baldwin are returning and will offer stability for Wilson as he looks to bring his team back to the Super Bowl for the third time. This defense doesn’t give up much and every other team in the NFL knows this. We see them going quite far and quite possibly as NFC Champions.

The Cardinals are the team to beat in the NFC, or are they? Coming off one of their best seasons ever, they will be NFC Champion contenders. Carson Palmer is playing better than ever. If he can maintain his health and chemistry with his go-to wide receiver Larry Fitzgerald, they will be unstoppable. They have a strong offensive line and a wealth of talent in their receiving corps. Michael Floyd’s speed against cornerbacks gives Palmer a confidence in him that is rarely wrong. Their defense could use a little work but Coach Bruce Arians has a knack for playing to his players’ strengths. This will help in filling in the corner position they so desperately need. Much of our staff believes they’re the NFC team heading into the Super Bowl.

The Giants made our list purely based on fandom here. Every statistic screams they have no chance but our die-hard fans in the office picked them as the NFC Champions. Their predictions may not be so farfetched, though. The Giants have a new coach who has completely changed the way this team trained in the offseason and at training camp. The return of Victor Cruz and Jason Pierre-Paul as fully functioning team members brings new hope to this team. You can’t overlook Odell Beckham Jr., as he is a stellar wide receiver when he keeps his cool and remains humble. Beckham has given his blessing on rookie Sterling Shephard as a new weapon and Eli Apple could be the cornerback they’ve been praying for. If Eli Manning can avoid interceptions this season, they actually may have a solid shot at the NFC Championship game. They have a tough schedule, but the pressure may be just what they need to propel them back to greatness.

The Panthers are going to prove they are a championship team this season. They went 15-1 last season. Yes, they crumbled in the Super Bowl, and we can’t overlook this fact. We think they’ve learned from their mistakes on and off the field. Cam Newton will be the League MVP again. His talent is unmatched in this league. The fans love him and the superhero theme he brings to each game. His consistent connection with Greg Olsen makes these two a dominant force, just like Superman and Batman. Consider this team the Justice League of the NFL. They have a stacked offensive line and this season is going to be an exciting one barring no injuries. Kelvin Benjamin is back and healthy which adds a depth missing last season. We can’t ignore this defense. They are virtually impenetrable and when you do break through, you regret it as Luke Kuechly is there to bring you down – hard. This team is solid and they are on a road to redemption after last February. We’ve got a strong feeling about this team going all the way; more than half of our staff picked them as NFC Champions and Super Bowl LI winners.

It’s safe to say we all went with our hearts in these predictions. You'll notice the one team missing from our predictions, the Packers. Surprisingly, we only had one person in this office supporting them.  Our number one matchup was the Panthers vs the Patriots. Who wouldn’t want to see this Super Bowl XXXVIII rematch? Same teams and same location, you couldn’t ask for a better set up. Two dynamic quarterbacks with two completely different tactics for winning will make for a great game. With some of the top defensive players in the league, both quarterbacks will have to step up and make every single connection. This is the big game and both teams have made it here before. This year will be different; this year both teams are up to the challenge of winning. Only time will tell.

You can sit at home with your friends and watch the game interrupted with commercials, or you and your friends can be in Houston with us for all of the Super Bowl LI action! Join the Pro Football Hall of Fame at their Game-Day Party outside of NRG Stadium with some of the NFL’s greatest players. Enjoy our premium food and open bar then head to your fantastic seats at the game!