The Pro Football Hall of Fame Enshrinement Weekend is the annual start to the new NFL Season and this year was a blast! Now that it is over, we can confidently say it is football prediction time! We’re getting pumped up for the 2016 NFL Season here at Hall of Fame Experiences by analyzing player stats, looking at last year’s results, and breaking down training camp footage.

Now that we’ve entered preseason, our team here can’t help but make a few predictions for this year. We’ve compiled a list of our key football predictions for you. Below you’ll find the HOF Experiences’ picks for Division Champions, games to watch, and must have fantasy players. Next week, we’ll cover who we think is going all the way to the Super Bowl!

If you love football like we do, you know being the division champ is important because you’re automatically in the playoffs. This is the dream; well, sort of. The dream is to win the Super Bowl, but you have to tackle a lot of teams to get there. Playoffs are the most stressful few weeks of football — if you ask me. Getting there is only half the battle; once you’re in, you’re playing to stay alive. I polled our office of die-hard football fans for this post and these are the results. Our predictions for each division champion were quite diverse; individual preferences tended to clash with undeniable statistics. However, there were two divisions we all could agree upon: AFC East and NFC South. I bet you can guess who we sided with.

The Patriots were the unanimous decision. Who could blame us? While they are the most hated team in the NFL, it is for good reason: pure jealousy. Are they the powerhouse in the NFL? They remain consistently strong and have won seven divisional titles in a row. Much of their success is attributed to being in a traditionally weak division, allowing the Patriots to shine year in and year out. Their best matchups are with teams not in the AFC East who actually challenge them. The controversy surrounding their quarterback won't distract from their first four games without him. They will continue to shine and will be even better when Tom Brady returns in week four.

We had a 50/50 split among the staff on this division champ; we're torn between the Bengals and the Steelers. Both teams made a splash last year and this year will be no different. Antonio Brown (Steelers) will no doubt be using his new ballroom skills on the field to escape any defense coming his way. While Brown is busy showing off his tango, AJ Green (Bengals) will be celebrating in the end zone at least once a game. We're really looking forward to these two teams facing off this season, especially later in the season. As for the other two teams, don't count on either making it to the playoffs. Cleveland thinks a basketball title will roll over to a Super Bowl berth which is far-fetched. Unfortunately for the Ravens, Beyoncé has made it back to the Super Bowl before them.

I’m not going to lie, we struggled to come to a decision on this division. Most of us went with the obvious choice of the Colts, but the Texans were a close second. If these two teams can recover and stay healthy, they have a fighting chance. Andrew Luck (Colts) will feel the need to prove his worth after signing his six-year, 140 million dollar deal this offseason. JJ Watt (Texans) just wants to stay healthy. The Titans are a non-factor as Mariota hasn't started to shine as a quarterback just yet. The Jaguars have been receiving a bit of praise in the offseason. Does that make the Jaguars the dark horse? Can they really make it to the playoffs?

It’s hard to see such a depressing defending Super Bowl Champion—unless you’re a Panthers fan. The Broncos are struggling hard to find the right fit in a QB which will outshine what they can do on the defense. The Raiders are the NFL’s most improved team and could come out to take the division as half of our staff has predicted. I’m placing my bets with the other half on the Chiefs. Hot off a stellar season, they should shine this year in Peyton Manning’s absence.

This is hands down my favorite division, but sadly not a strong one the last few years. Each team has been plagued by injury and poor coaching which has drastically changed in the offseason. Revamped programs and preseason camps are looking promising for each team in this division. The return of stars Dez Bryant and Tony Romo for the Cowboys and Victor Cruz and Jason Pierre-Paul for the Giants have renewed the confidence of both teams. The Redskins are hoping for a star in Josh Norman, but his training camp performance is proving otherwise. We couldn’t decide on a clear winner for this division; only time will tell.

This division was a clear choice: the Packers.  We're hoping Jordy Nelson makes his return before the season, so Randall Cobb isn't missing his partner in crime. The defense of the Packers is consistently strong and will continue to bring them to the playoffs. While Adrian Peterson is the Vikings' golden boy, he’s not enough to carry them to glory. The Lions and the Bears continue to be a non-factor which leaves quarterbacks, Teddy Bridgewater and Aaron Rodgers clear to dominate this league.

Is there even an option here? The Panthers, all the way. While our CEO, Brian, believes in his Falcons, Cam Newton is going to take this team to the playoffs again. If Newton can connect with his receivers and tight end, Greg Olsen, as consistent as last season, the Panthers will not be shut down. Their defense is a force of nature and losing Josh Norman was like selling your childhood bike at a yard sale —once beloved but absolutely worth freeing up space in your garage.

This division has two of the best teams in the NFL this season: the Seahawks and the Cardinals. Russell Wilson and the Seahawks' stellar defense continue to bring this team to the playoffs, but we think they will struggle a bit this year. The Cardinals are hard to beat. This is the division to keep your eye on. Each game will count and each game will blow you away.  The 49ers continue to slide down the standings and will stay there for a while,  so don’t look to Kaepernick to save them.

While we covered this at length previously (you can read that here) I checked in with our staff to find out what games they are most excited for. We had a wide range of most-anticipated games but each matchup is exciting for sure.

Must Have Fantasy Players

As we gear up for our Fantasy Football league around here, we couldn’t leave you without some top players to pick. While we’re all fighting over these guys, check out who I’d have if my team was made of only Pro Football Hall of Famers! 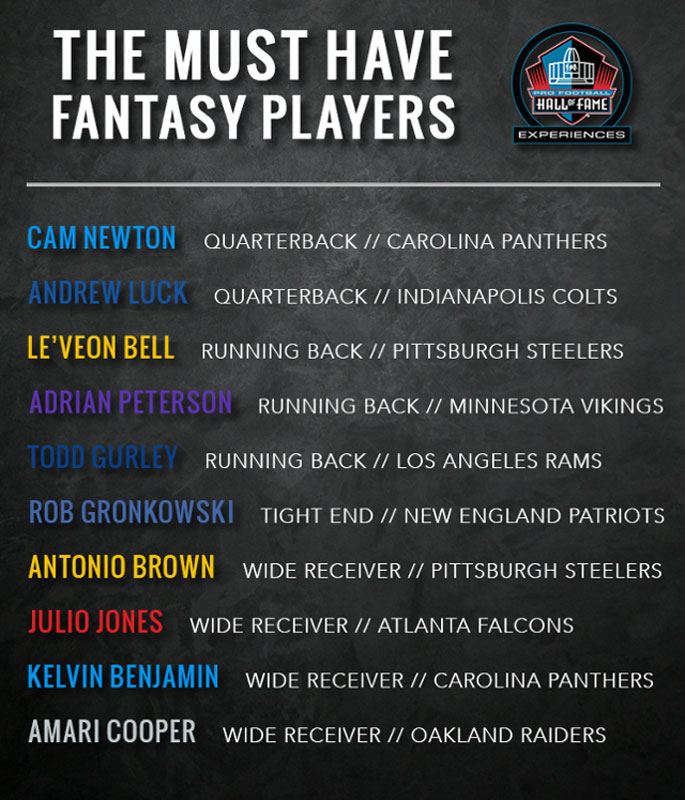 Are you excited for football yet? We sure are! While we gave you a list of games to watch, our favorite still remains — the Super Bowl! Why watch it from your couch when you can be there? Get access to the game, our VIP Game Day Party, and Pro Football Hall of Famers with a VIP Package from us!