Over the course of his 12-year career, Ed Reed made sure every quarterback thought twice before throwing the ball within his radius. In anticipation of Reed receiving his Gold Jacket at the 2019 Enshrinement Week, we're looking back at the five moments that made Reed worthy of the Hall of Fame. 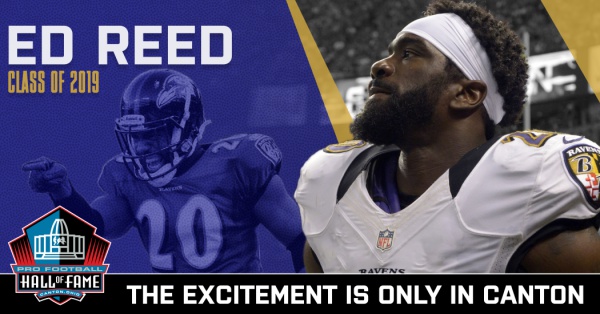 The Ravens entered a Week 12 meeting with the Seattle Seahawks at 6-5, needing to win to keep any playoff hopes alive. Halfway through the fourth quarter, Baltimore trailed, 41-24, as the Seahawks lined up to punt.

On the next play, Reed came in from the edge and blocked the punt, corralling the loose ball and returning 16 yards for the score. The special teams play shot life back into the Ravens, who scored 20 unanswered points and won, 44-41.

Baltimore made it to the playoffs after finishing the season 10-6.

In a midseason matchup between the Ravens and Cleveland Browns, Baltimore was up 20-13 with 41 seconds remaining.

With Cleveland inside of their opponent's endzone, the Ravens needed to make a play.

As quarterback Jeff Garcia threw into the endzone, his pass was deflected and Reed brought it in, immediately locking eyes with the other endzone over 100 yards away.

After a 106-yard trot, Reed had recorded the longest interception touchdown return in history.

Four years after setting the record for longest interception return, Reed did it again. In a Week 12 meeting with the Philadelphia Eagles, the safety picked off Eagles quarterback Kevin Kolb and took the ball 107 yards back to the house.

The defensive scoring play opened the lead up to 19-7 and the Ravens would end up winning by over four touchdowns.

Reed’s 2008 season was more than just the record-breaking interception against Philadelphia. In 2008, Reed tied his career high in interceptions (nine) and returned a career-high three turnovers back for touchdowns.

Reed's success can partially be attributed to the impact of new head coach John Harbaugh, who took over the Ravens in 2008.

In Reed’s final season in Baltimore, he finally brought the Ravens to the top of the mountain.

Reed and fellow Hall of Famer Ray Lewis led a Ravens defense that dominated the league, leading to a date with the San Francisco 49ers in the 2013 Super Bowl.

While the "Harbowl" will be remembered for the crazy “blackout“ that set half of the lights in the stadium off, it will mark the last game as Ravens for both Lewis and Reed.

In Reed’s final game as a member of the franchise, he recorded five tackles and a six-yard interception help the Ravens win their first Super Bowl since 2000.

One of the greatest safeties of ever to play the game will enter the Hall of Fame on August 3. Be there for the momentous moment with an Official Ticket Package from HOF Experiences. Select between single and multi-day packages, featuring exclusive parties and autograph sessions, for the ultimate experience at 2019 Enshrinement Week Powered by Johnson Controls.